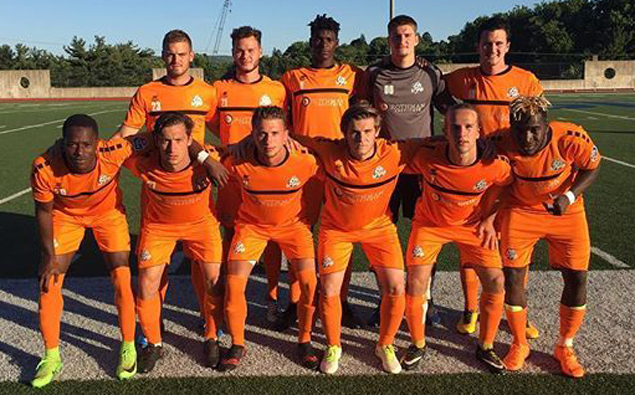 Simone Raiola (Grand View / Triuggo, Italy) added a goal and an assist to pull ahead as the team's leading scorer in PDL play (2 goals, 2 assists, 6 points). Todd Morton (Delaware / West Chester, PA) only had to make five saves and nearly had his second straight clean sheet, but Lehigh Valley scored a late goal to end the team's shutout streak at 283 minutes.

With the win, Ocean City moves into a tie for third place in the Mid-Atlantic Division with the New York Red Bulls U-23s. The Storm quickly shift their focus to Saturday night's massive game against long-time rival Reading United AC, who are currently in first place. It will be the 46th all-time meeting between the two teams and give the Nor'easters a chance to close the seven-point gap between them in the standings.

"The team came out of the gate blazing scoring three goals in the first half," said Nor'easters general manager Giancarlo Granese Jr. "The team had a lot of energy and there were several chances in the first half that could have added to the score. The second half was a bit more relaxed with a three-goal lead and we could sit back more."

Ocean City started out on the attack with Mansaray nearly opening the scoring in the 8th minute. He put the ball into the back of the net but the referee called him offside.

Mansaray would finally break through in the 23rd minute with the help of Raiola. The Italian played a centering ball across that avoided the two center backs and found Mansary who hit it low inside the far post to put the visitors on the scoreboard.

Seven minutes later, the Nor'eaters doubled their lead when Mansaray played provider. Mansaray sent in a perfectly-timed cross in the air to Raiola who headed it past the helpless goalkeeper from close range.

Mansaray would score his second goal just before halftime. Fredlin "Fredinho" Mompremier (Fairleigh Dickinson / Limbe, Haiti) played a through ball to Mansaray who held off a defender and slipped it past the goalkeeper to make it 3-0 in the 44th minute.

"Abdul [Mansaray] was given the start up top and did not disappoint," said Granese. "He gave the team the energy up top that they needed to get three points in the road."

Deri Corfe (Wright State / Chester, England) would put the game away in the 81st minute when Alex Rose (North Carolina / Cary, NC) capped off a total team effort goal. In the end, Corfe played Rose through into the penalty area where he was one-on-one with the goalkeeper. Rather than taking a crack at his third goal in as many games, Rose unselfishly played the ball back to Corfe who tapped it in.

United would deny Ocean City a third straight shutout win with a goal in the 83rd minute. A cross was sent in and met at the penalty spot and powered past Morton.

The Unsung Hero of the Night was Kyle Gurrieri (South Carolina / Totowa, NJ). According to Granese, Gurrieri maintained possession throughout the night by minimizing turnovers and won several battles in midfield.

With the win, improves to 6-1-0 all-time against Lehigh Valley. This is the first of three games this year against United. The Nor'easters will return to Allentown for a rematch on June 27, and Lehigh Valley will visit the Beach House in Ocean City on July 11.