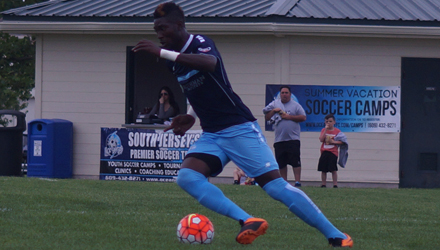 When the PDL released its Top 50 prospects list at the beginning of the season, Walsh's name was nowhere to be found. Last week, after putting himself in position to win the PDL scoring title, Chevy rocketed up the chart and now sits in the Top 10 in the 63-team league.

UPDATE: Chevy Walsh scored a goal against the Baltimore Bohemians to lead the Nor'easters to a 3-1 win and clinch a playoff berth. That goal gave him 14 on the season which was enough to win the PDL scoring title.

The 2016 Ocean City Nor’easters season has been an exciting ride. The team has clinched its 12th winning season in the last 14 years and they have done that with another talented team but also with some history-making individual performances. One of those performances has come from one of the new faces at the Beach House: Chevaughn “Chevy” Walsh (Jefferson College / Spanish Town, Jamaica.)

Walsh, a 6'3, 175 pound forward has been revelation to the Storm this season. As a consistent scoring threat, Walsh is one of three players on the roster to play in all 13 games to this point and he has scored 13 goals in those games. With one game to play, Walsh has already set the club's single-season record for goals and enters Sunday's season finale against Baltimore tied for the league lead in goals.

And for Walsh, playing soccer has been passion that he has had ever since he was a child.

“When I was growing up, soccer has always been my passion. I didn't have the opportunity to play a lot growing up because my mom was protecting me from getting hurt,” Walsh said. “I would get in a fight every day or I would come home crying because I lost a game of soccer.”

Growing up in Spanish Town, Jamaica, Walsh credits his mother as a driving force and inspiration in his play. When he was eight, he would sneak out of his house to play local soccer games in his neighborhood. While she was worried about him getting hurt, she also saw he had talent.

“I was playing with some older guys because I was eight at the time,” Walsh said. “My mom saw that I was playing good and she didn't lock me in the house anymore. She bought me some soccer cleats and that's how it all started.”

Through high school, Walsh was a sought after recruit for college soccer coaches. He chose to go play at Jefferson College in Hillsboro, Missouri. He credits the consistent pursuit of Vikings head coach Ricardo Garza to signing with the junior college. While at Jefferson he has honed his skills at being a striker and so far has been very successful.

In 20 games played in his sophomore season at Jefferson, he scored 25 goals and had 14 assists. Off the field, Walsh is also plays a tough game in the classroom.

“Sometimes I just have a hard time multitasking," Walsh said. "[There's] so much to balance between soccer and maintaining a good GPA.”

But just like on the soccer field, he credits the team around him for helping him succeed.

“My favorite instructor will always be Sara Denny. She has helped me so much along with my advisor Jason Gardener,” said Walsh “Other great faculty members that pushed me to be a good student are Julia Frazer, Linda Covert and Deb Shores. They would always make sure I do what is needed to get the job done. It's been a great experience so far in college.”

In his first season with the Nor'easters, he has enjoyed the family atmosphere with the club.

“Living in Ocean city is pretty nice," said Walsh. "It keeps me away from trouble and being around professional-minded teammates and managerial staff.”

On the field Walsh has been a huge spark to the Nor’easters. He became the first player in club history to score a hat trick twice in a season, as he scored a trio of goals against Evergreen FC on May 28 and then again on June 21.

His 13 goals has also gotten the attention of the scouts and members of the media. When the Premier Development League (PDL) released its Top 50 prospects list at the beginning of the season, his name was nowhere to be found. Last week, after putting himself in prime position to win the PDL scoring title, Chevy rocketed up the chart and now sits in the Top 10 in the 67-team league.

Head coach Tim Oswald sees the player, as an important piece to the team and a terror to his opponents.

“Chevy has a great build and a great body for the game," said Oswald. "He can score goals and he really puts teams under pressure in the final third.”

But for Walsh, its all about being humble and never giving up.

“I have been fortunate with the hard work that I have been putting in along with a great set of teammates and coaches,” said Walsh. “The key to my success is that I am always humble and I never stop praying no matter how hard time gets.”

For individual tickets, click HERE. For group tickets, email tickets@oceancityfc.com, or call the ticket office at (609) 736-4849.