Comeback for the ages: Nor'easters stun Evergreen with 3 goals in final 5 minutes (VIDEO) 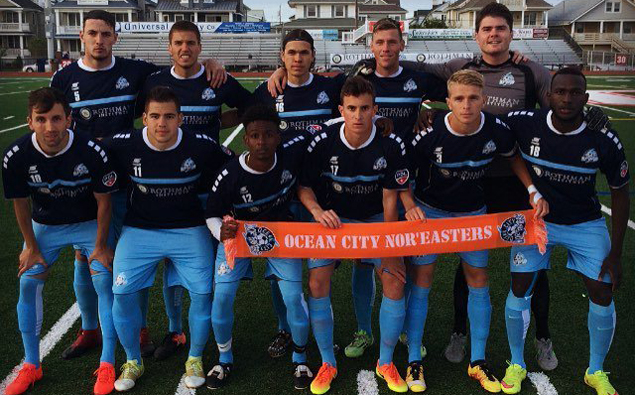 The Ocean City Nor’easters completed their Premier Development League (PDL) opening weekend with a sweep of the Evergreen Hammers FC in the opener of the PDL season.

After a one-sided 4-1 win over the Hammers on Friday to open the regular season at Carey Stadium, the two teams squared off on Sunday night for a rematch. The second game couldn’t have been more different, or more dramatic. The Nor’easters found themselves trailing 2-0 heading into the 85th minute, but in a wild final 10 minutes (including stoppage time), Ocean City scored three goals to complete the weekend sweep over the Hammers.

Akeil Barrett begins the comeback in the 85th minute
The Nor’easters joined the PDL in 2003 and since then, Ocean City has never overcome a two-goal deficit to win until Sunday night’s thrilling finish.

The victory on Sunday was a hard-fought one as the team had to overcome a slow start after Evergreen FC went into halftime with a 2-0 lead. The Nor’easters came close to scoring on multiple attempts. Nor’easters Ignacio Tellechea (Madrid, Spain / West Virginia Tech) and Fredlin Mompremier (Limbe, Haiti / Fairleigh Dickinson) came close on multiple attempts to score only to be stopped by Evergreen’s goalkeeper.

Evergreen opened the scoring at the Beach House in the 36th minute when Chris Cooke received a pass down the middle of the field shot it past Nor’easters keeper Patrick Fallon (Swarthmore, PA / High Point). Evergreen would later add on to their lead in spectacular fashion when AJ Sheta chipped the ball from 53 yards away past Fallon who was caught off his line to extend their lead in the 43rd minute.

“We had to change tactics, change the way we play,” said Thompson. “Make it a scrappy match and hope that we break them down that way.”

The changes in tactics and attitude showed in the team as the second half progressed. Ocean City came out firing with Tellechea and Mompremier once again leading the attack.

Ocean City finally got on the board when second half sub Barrett received a pass from Mompremier, dribbled around two defenders, and got his shot past the keeper to bring the Nor’easters within a goal in the 85th minute.

Ocean City continued to put the pressure on to find the equalizer and it came in the 88th minute. After a corner kick, a scramble in the box led to Kozma winning the ball and getting it past the keeper to tie the game.

And the Nor’easters weren’t done yet.

In stoppage time, Colmer, the team captain, scored with a huge shot from outside of the box that rocketed past the keeper, off the post and into the back of the net to complete the comeback.

The Nor’easters improve to 2-0-0 in the early PDL season, marking the first time since 2013 that the club has started with back-to-back wins to begin a campaign. That year, Ocean City won the Eastern Conference championship and advanced to the PDL Final Four.

For first-year head coach John Thompson, his inaugural season as coach of the team is off to a great start. He becomes just the second coach in franchise history to win the first two regular season games of the season. The other is Mike Pellegrino, who coached from 2007-08, and started the 2007 season with a 5-0-0 record.

The value of a dramatic early-season win is not lost on Thompson.

“With three goals in the last ten minutes, we showed great character,” he said. “And with that the belief we can do something special this year.”

Next up for the Nor'easters, they will hit the road for the first of four straight road games beginning on Thursday, May 25 when they take on FA Euro New York. The game will be played on Calvert Vaux Park in Brooklyn. Kickoff is scheduled for 7:30 p.m.

The next home at the Beach House isn't until Sunday, June 11 when they will host the Jersey Express.

WHAT A COMEBACK!!!! Why football is the best sport in the world!

That is why you love football, what a game!!!! YASSSSSSSS