With a 2-1 road win, Ocean City extends unbeaten streak over Hammers to 12 games 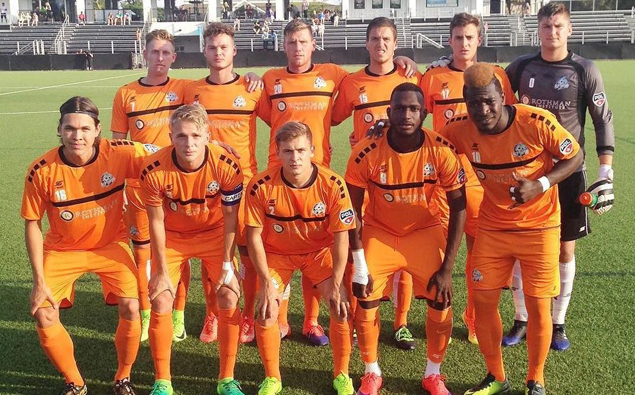 The Ocean City Nor'easters held on to defeat Evergreen FC on the road with two goals from Fredlin "Fredinho" Mompremier (Fairleigh Dickinson / Limbe, Haiti). With the win, the Nor'easters complete a three-game season sweep of the Hammers for the second consecutive season and improved to 11-0-1 all-time against the Virginia club.

The first half was a very eventful one as it contained all three goals and plenty of action. Through the first 25 minutes, it was a fairly even affair between the two sides, who have been competing against each other since 2004.

In the 29th minute, Ismael Noumansana (Lenoir-Rhyne / Bamako, Mali) led the Nor'easters on a breakaway with Fredinho. They were in behind the defense and had a 2-vs-1 opportunity against the keeper. Noumansana waited until the very last second to pass the ball across to Fredinho who comfortably tucked the ball home.  This was Noumansana's team-leading fourth assist of the season.

Once Ocean City went ahead, it gave Evergreen a bit of a boost. They looked like a completely different side after conceding the opening goal. This showed as they equalized in the 37th minute through Lewis Long. Just one minute beforehand, Evergreen would have scored if not for the heroics of Nikola Fimic (Oklahoma Wesleyan / Novi Sad, Serbia). The Serbian defender was the last man back as Long got around Nor'easters goalkeeper Todd Morton (Delaware / West Chester, PA). His block kept the Nor'easters level with the Hammers on the road.

However, It did not take long for Ocean City to get the lead back as Fredinho won a penalty in the 39th minute and converted from the spot. This was his second goal of the match and his team-leading sixth goal (seven in all competitions).

The second half featured some exciting action for both sides but nothing materialized in the form of goal scoring.

Both goalkeepers were kept busy throughout the match as the Morton made six saves for Ocean City. Evergreen's William Bush made seven stops as the Nor'easters attacked relentlessly throughout the night.

Ocean City has five days of rest heading into a crucial division game against long-time rival Reading United on Friday, June 23. Kickoff is scheduled for 7:30 p.m. at Don Thomas Stadium in Reading, Pa. Reading handed the New York Red Bulls U23s their first loss of the season, 2-1, on Saturday night which brings the three teams a little closer in the race for the division title. The Nor'easters are in second place, three points behind the Red Bulls U23s, with Reading close behind, three points behind Ocean City in third place. United has played three fewer games which makes Friday's match all the more important as the top two teams in the division qualify for the PDL playoffs.

The match at Reading will be the final regular season road game for the Nor'easters as they finish out the 2017 schedule with four consecutive home games at the Beach House.