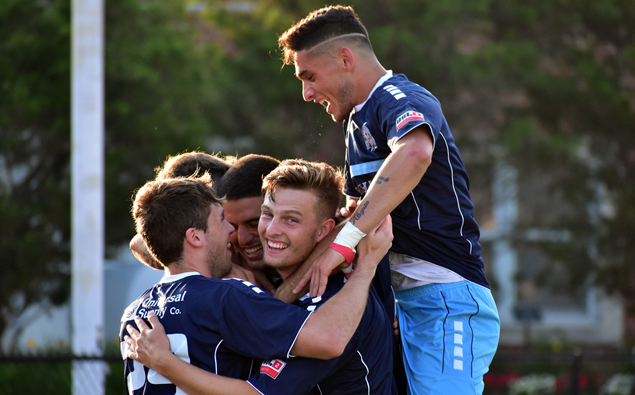 The Ocean City Nor'easters took a big step toward qualifying for the USL League Two playoffs on Friday night in the first of two huge home games this weekend at Carey Stadium ("The Beach House") in Ocean City, N.J. The Nor’easters avenged an early season defeat at the hands of Lehigh Valley United by beating them 4-3 on the strength of two goals each by Deri Corfe (Wright State / Chester, England) and Claudio Repetto (Coastal Carolina / Genova, Italy).

The Storm held on despite playing the final 11 minutes of the match down a man after Albert Andres-Llop (West Virginia / Castellon, Spain) received a second yellow card.

"The boys showed great energy early in both halves to score the four goals but showed even better effort and determination to hold the lead late in the game after going down a man," said Nor'easters head coach Kevin Nuss.

With the win, the Nor'easters improve to 4-3-3 on the season and move into third place in the Mid-Atlantic Division, just one point behind the Long Island Rough Riders (who have played one fewer game). The division winner and the best second place team in the Eastern Conference qualify for the USL League Two playoffs.

Many of the Friday night crowd at the Beach House were barely settled in their seats when Repetto opened the scoring in the opening minute of the game. A few minutes later, Corfe sent a cross into the box that Repetto tapped to give the Nor'easters a 2-0 lead five minutes into the game.

Everything was looking up, until Lehigh Valley answered with a goal of their own by Eddy Enowbi two minutes later.

Chance after chance would occur in the first half, including some nifty back heel passes from the home side. However, United had a bicycle kick of their own that was unable to find the target.

Just before the halftime break, Enowbi would score his second of the game, and his team-leading fourth goal of the year in the 44th minute to tie the match. The second half started off with a bang as Corfe would score in the 47th minute. The team's leading scorer had the ball on the wing, cut inside, beat two defenders and beat the goalkeeper to the near post.

Corfe would provide what would prove to be the deciding goal in the 52nd minute when the England native caught everyone off guard with a goal from more than 30 yards out. It was Corfe's team-leading eighth goal of the season, and his 14th career Ocean City tally. His 14 career goals moves him into a three-way tie (with Tony Donatelli, Ryan Heins and Chevaughn Walsh) for fifth place on the club's all-time scoring list.

Lehigh Valley didn't waste much time after the Nor'easters went down a man when Andres-Llop received his second yellow card in the 79th minute. Bliss Harris would score his first goal of the year four minutes later.

The Nor'easters defense would hold strong for the final 10 minutes or so to improve to 9-2-0 all-time against LVU, including a perfect 5-0-0 record at the Beach House. The Storm are now unbeaten in their last six home games dating back to last season.

The Nor’easters must keep up this level of play in order to keep racking up the points and staying in playoff contention. The Nor’easters will go for the weekend sweep on Sunday when they host the Cedar Stars Rush at Carey Stadium at 7 p.m.