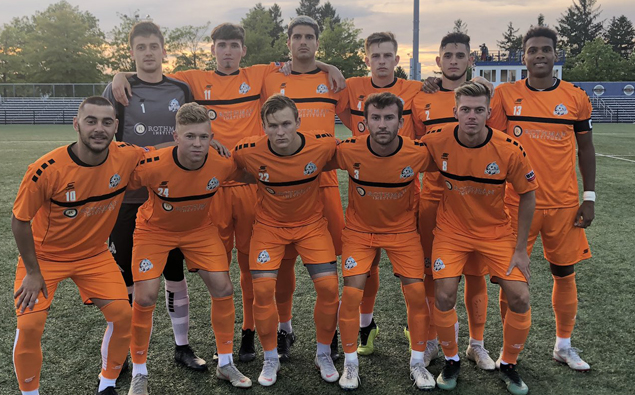 The Ocean City Nor'easters picked up their first win of the season, and it was a big one. On Wednesday night, the Nor'easters defeated the Long Island Rough Riders, 3-1 on the road.

Ocean City's team MVP from last year, Deri Corfe (Wright State / Chester, England) has picked up where he left off, adding a pair of goals, including a 35-yard strike that caught the goalkeeper off his line. After an assist in the season opener, Corfe extends his point streak to five games, dating back to last year.

With the win, the Nor'easters improfve to 1-0-1 on the young season and are two points out of first place in the Mid-Atlantic Division in USL League Two.

"The boys are doing everything we are asking for and more," said Nor'easters head coach Kevin Nuss. "They are buying into our style of play with a discipline and a great work ethic."

It didn’t take long for the Nor’easters to gain a lead. In the second minute of the game, the Rough Riders goalkeeper, Andrew Withers, tried clearing the ball but it found his way to Corfe's foot. Corfe took a touch and slotted the ball past the backtracking keeper to put the Nor’easters up 1-0.

The early offense did not stop there. In the 12th minute, Corfe ventured into the box and was brought down from behind by an opposing defender. The head referee signaled for a penalty kick and Repetto, who assisted on Corfe's opening goal, stepped up to take the kick. Withers guessed correctly, however, Repetto’s strike was too much to handle for the Rough Riders keeper, increasing the lead to two.

The Nor’easters defense had its first real test in the 30th minute. Brandon Bartel (Pennsylvania / Fleming Island, FL) and the opposition were fighting for possession in the box when Bartel clipped the player, resulting in a penalty kick. Hoffelner leaped to his left and blocked the Rough Rider penalty to keep the clean sheet.

The 30th minute penalty kick attempt was the Rough Riders' best chance during the first 45 minutes of play.

As time was winding down in the first half, Corfe received a ball from Gustavo Fernandes (Stony Brook / West Babylon, NY) on a counter attack, caught Withers off his line and without hesitation, launched a 35-yard beauty into the back of the net.

"Deri is really special," said Nuss after the game. "He changes the game in moments, where he just takes over."

The Nor’easters came into the second half with a 3-0 lead. Despite what the scoreboard read, both sides did not lighten up. Both sides had opportunities but couldn’t execute. Substitute Joey Bhangdia (Pennsylvania / Lewisburg, PA) made his Nor’easters debut during the 63rd minute. Two minutes after he came on the pitch, Bhangdia connected on a header, beat Withers, but nailed the crossbar.

About 15 minutes later, the ball trickled to Bhangdia, who sent a rocket toward the Rough Rider goal. However, Withers was in position to make the save.

Down 3-0, the Rough Riders continued their pursuit during the final five minutes of play. The best Rough Rider chance came in the last minute of play when Manu Ferriol was brought down in the box. The referee signaled for another penalty kick, the third of the game. Hoffelner could only watch as Ferriol placed the ball perfectly into the bottom left corner.

One minute after their goal, the Rough Riders were back on attack. A cross was sent into a packed 18-yard box, which led to a shot frenzy. The first shot rocketed off the crossbar, after collecting the ball back the second Rough Rider shot was saved by Hoffelner. The ball then bounced around the penalty marker before another Rough Rider had a chance. Ocean City's 2018 Defender of the Year, Williams N’Dah (Charleston / Rome, Italy) stopped the third shot with a clearing header. If it weren’t for N’Dah’s positioning near the goal line, the Rough Riders would’ve made it 3-2. N’Dah’s header gave the Nor’easters possession as the referee blew the final whistle as the Storm earned their first road win at Long Island since 2013.

"I am very happy with our performance today but we have to continue to be better," said Nuss. "We have some time to recover but then our focus is 100 percent on Lehigh Valley."

Along with Bhangdia, two other players made their Nor’easters debut during the 3-1 win against the Long Island Rough Riders: Leon Maric (St. Joseph’s / Gilbertsville, PA) and Carlos Solorio (Eastern Oregon / Los Angeles, CA).

With the 3-1 victory, the Nor’easters improved to 9-9-4 all-time against the Rough Riders.

The Nor’easters will be on the road again when they face off against Lehigh Valley United next Wednesday, May 29. Kickoff is scheduled for 7 p.m. at Cedar Crest College in Allentown, Pa. The team will then return home to Ocean City when the Storm host Evergreen FC on June 1 at the Beach House.