Heartbreak at the Beach House: Nor'easters fall short of another US Open Cup upset (VIDEO) 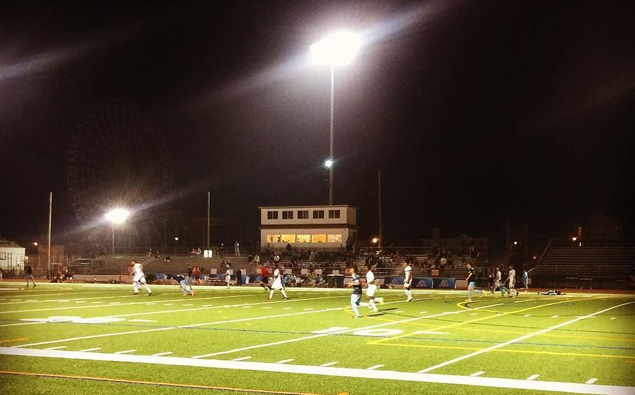 The Ocean City Nor'easters' quest for a sixth upset of a professional team in the Lamar Hunt U.S. Open Cup fell painfully short on Wednesday night at Carey Stadium. After holding the Harrisburg City Islanders to a 0-0 draw after 120 minutes of soccer, a winner had to be crowned and the match went to penalty kicks. In the tiebreaker, Harrisburg needed seven rounds to advance, as the United Soccer Leagues team prevailed 6-5 in the shootout.

This was the 18th U.S. Open Cup game in franchise history for Ocean City, but was the first time they had gone to a penalty kick shootout. Goalkeeper Jimmy Slayton had a standout performance making some big saves throughout the game to keep Harrisburg off the scoresheet. This marked the sixth time that an Ocean City goalkeeper has shutout a professional team in US Open Cup play. No other amateur club in the country has more clean sheets against professional opposition.

With the loss, the Nor'easters are eliminated from the 104th edition of the U.S. Open Cup, on a night that was a massive success for teams from the Premier Development League (PDL). Four PDL teams upset professional sides, including the Nor'easters division rivals, Reading United, who knocked off the defending North American Soccer League champion New York Cosmos.

Most of the excitement in the match came towards the end, but Ocean City had a few big chances missed during regulation. Alexander Simovic and Akeil Barrett both had good chances in the box that may have ended up in the back of the net had they been in midseason form. Earning a 3-1 home win in last week's First Round contest over Junior Lone Star and taking a USL team like Harrisburg to penalty kicks was quite an accomplishment for the Nor'easters. Considering the team had barely had a chance to get to know each other on the field as many players had just recently arrived from their respective colleges in the last week or two.

Throughout the 120 minutes, the Nor'easters held their own against Harrisburg. Despite the City Islanders outshootingn Ocean City 12-8, it was a fairly even match for the fans in attendance at The Beach House. The City Islanders controlled most of the second half but Ocean City had their fair share of possession in the first half.

When extra time arrived, it was easy to tell that both teams were dealing with exhaustion.  It was expected due to the fact that this is just Ocean City's second match of the season.  They also had to deal with losing creative midfielder Tyler Collishaw to injury in the second half.  Collishaw was the man of the match in the first round matchup against Junior Lone Star and looked fantastic in the 67 minutes he was able to play.

The Nor'easters don't have too much time to hang their heads as they kickoff the 2017 PDL campaign this weekend with two home games against Evergreen FC. The Hammers visit the Beach House from Virginia at 7 p.m. on Friday and then again at 7 p.m. on Sunday night.

With two impressive performances in the US Open Cup under their belt, the Nor'easters are hoping to use that momentum to carry into the league season as they aim to defend their Eastern Conference championship.