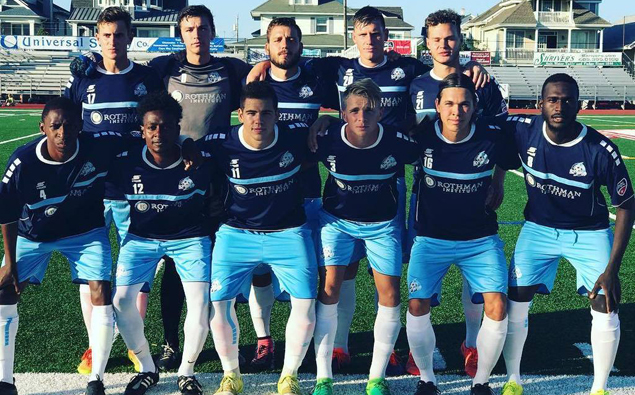 The Ocean City Nor'easters claimed a win on Friday night at "The Beach House" in a friendly match against the New England Revolution Under-23 team. Birthday boy, Akeil Barrett (Tulsa / Kingston, Jamaica) scored from the penalty spot and added an assist in a 2-0 win over the MLS Academy side.

After a scoreless first half that saw only a few chances for both sides, Ocean City stepped their play up in the second half, scoring two goals. Early in the second half, the Nor'easters were awarded a penalty after a ball bounced up and hit the arm of a Revolution defender. Barrett confidently stepped up and scored into the bottom right corner. Revolution keeper, Austin Aviza, guess correctly and got a hand on it but there was just too much power on the shot.

The Nor'easters would not seal the win until the 83rd when Barrett flicked the ball beautifully to Fredlin "Fredinho" Mompremier (Fairleigh Dickinson / Limbe, Haiti) who put it through substitute keeper, Kyle Parks' legs.

Ocean City looked dominant throughout the match and it was a great chance for some of the Under-23 players to get real game time alongside the PDL squad. The win marked the second year in a row that the Nor'easters have defeated the Revolution in a mid-season friendly. Last year, Ocean City defeated the Revs 3-1 at Carey Stadium thanks to a hat trick from Nathan Regis.

The Nor'easters will now quickly shift their focus back to league play as they host the Mid-Atlantic Division front-runners on Sunday. With the New York Red Bulls Under-23s (10-1-0) coming to Ocean City, the Nor'easters need a win to keep their slim PDL playoff hopes alive. However, even if Reading United eliminate the Storm from playoff contention by beating Jersey Express on Saturday night, there will still be plenty to play for. A win over the Red Bulls could give Ocean City the points they need to qualify for the 2018 Lamar Hunt U.S. Open Cup, although the format for next year's national championship has not been officially announced. Kickoff for the game is scheduled for 7 p.m.