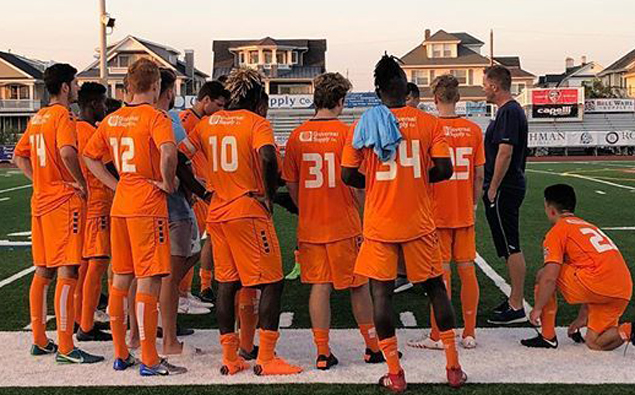 The Ocean City Nor'easters hosted the D.C. United Under-23s in an exhibition game on Friday night at Carey Stadium. The goal was to build some confidence heading into Sunday's Premier Development League (PDL) season finale against the New York Red Bulls Under-23s.

The Nor'easters scored five goals in the opening 32 minutes of the game and never looked back as they defeated D.C. United, 7-1.

Ocean City remain undefeated in exhibition games against amateur teams over the last three seasons, including two wins and a draw against D.C. United U-23s.

"We were clinical tonight," said Nor'easters head coach John Thompson. "We created a lot of chances and were very dangerous going forward. I'm hoping we can maintain that same attacking flow and confidence on Sunday night."

The Nor'easters now shift their focus to Sunday's finale against the Red Bulls, who clinched a PDL playoff spot with a 3-1 win over the Long Island Rough Riders on Friday night.

After Friday's action, the Nor'easters are sitting in 17th place in the PDL's 2019 US Open Cup qualifying table. Ocean City needs a win to have a chance to stay in the Top 20, which would likely be enough to qualify for next year's tournament.

The Nor'easters opened up the scoring just eight minutes into the game when Deri Corfe (Wright State / Chester, England) found Max Hemmings (Georgia State / Wokingham, England) on a through ball in the penalty area. Hemmings was taken out by United goalkeeper Aidan Hogan and the referee pointed to the penalty spot. Hemmings converted the PK to give the home team an early lead.

Corfe nearly doubled the lead five minutes later when he rang a shot off the post. Then, Alex Rose (North Carolina / Cary, NC) followed up with a header that went just over the crossbar.

Three minutes later, Ocean City would crack the code as Rose stole the ball from a United defender and found a wide-open Fredlin "Fredinho" Mompremier (Fairleigh Dickinson / Limbe, Haiti) who tapped the ball in to make it 2-0 in the 16th minute.

Five minutes later, Corfe was involved again as the team's leading scorer in all competitions (5 goals, 7 assists), found Rose (who leads the team in goals with seven) who scored the third goal of the game.

The fourth goal came just three minutes after that as Abdul Mansaray (Wilmington / London, England) sent a curling ball up the field to Ocean City central defender Finn Reese (Nyack College / Hamburg, Germany). Reese, who has started and played every minute of the last three league games since joining the team on June 27, dribbled around the goalkeeper and scored.

Mansaray was involved in the fifth goal that came together in the 32nd minute. Mansaray received a ball from Rose and then used his speed to beat his defender and bury the ball into the back of the net to give his team a 5-0 lead just past the half-hour mark of the game.

With the game in control, Slayton was replaced in goal by James Brett in the 37th minute. Slayton kept a clean sheet and didn't need to make a save in during his time in the game. Meanwhile, Brett made four saves, including a spectacular one in the 83rd minute. The only gave he gave up came just before halftime as D.C. ruined the clean sheet.

The Nor'easters made wholesale changes at halftime as the team elected to rest most of their starters for Sunday's league game.

In the 64th minute, Hogan made an incredible save for the U-23s but he couldn't control the rebound as Torino put it away to increase the lead to 6-1.

The final goal of the game would come in the 73rd minute when Fredinho slid a pass across the box to Torino who placed the ball into the lower corner of the goal.

Ocean City would see the game out as they rewarded their loyal fans with a seven-goal performance. The team would enjoy a silly last few minutes as forward Alex Rose would exit the game and would be replaced at the top of the offense by goalkeeper Todd Morton.