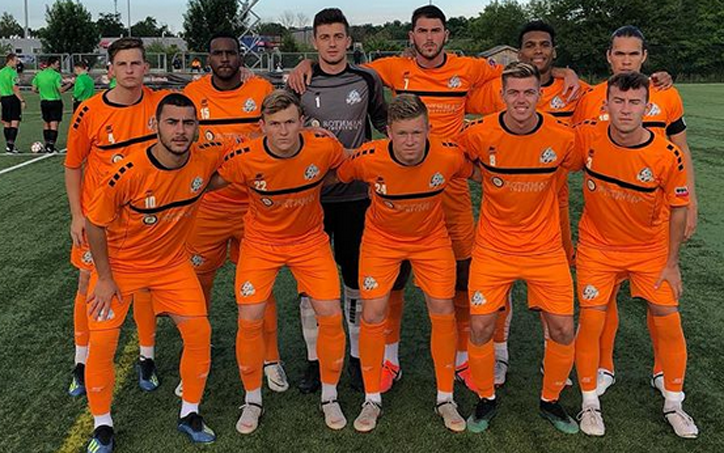 Four first half goals remained the only goals throughout the entire 90 minutes during a hard-fought match in Whippany, NJ between the Ocean City Nor'easters and the New York Red Bulls Under-23s. In the end, Ocean City let an early 2-0 lead slip away and had to settle for a 2-2 draw against one of the top teams in the division.

With the draw, the Nor'easters end the day with a 2-2-2 record, and move into a tie for fifth place in the division. Luckily for the Storm, they have at least one fewer game played than most of the teams in front of them. Also, six of the team's remaining eight games are at home.

It didn’t take long for the Nor’easters to get on the scoresheet. In the 11th minute, Kwesi Allen (Drexel / Port-of-Spain, Trinidad and Tobago), who was making his Nor'easters debut, combined with RC Williams (Pennsylvania / Wayne, PA) along the sideline. Allen took the pass from Williams, took a few touches to get on his left foot and ripped a shot into the top left corner, beating the Red Bulls goalkeeper.

Five minutes later, the Nor’easters were awarded a corner kick. Ryan Inman (High Point / Birmingham, England) sent a beautiful ball into the box. Leon Maric (St. Joseph’s / Gilbertsville, PA), beat his defender and headed Inman’s cross into the back of the net. Just like that, the Nor’easters were up 2-0 in the first 20 minutes of play.

Unfortunately for the Nor’easters, the clean sheet wasn’t kept for long. One minute after the Maric goal, the Red Bulls made their way near the Nor’easters box. Jonathan Filipe ventured to the middle of the box, leapt up and connected on a header, beating goalkeeper Jan Hoffelner (St. John’s / Frankfurt, Germany), who was making his sixth consecutive start in USL League Two play.

Gustavo Fernandes (Stony Brook, West Babylon, NY) came on for Williams N’dah (Charleston / Rome, Italy) in the 33rd minute for the first substitution of the game.

As time wound down in the first half, Inman passed a ball into the box. Maric ran onto it but before he could do anything, he was tripped up by a Red Bulls defender. The head referee signaled for an Ocean City penalty kick. Maric stepped about five paces back, waited for the referee’s whistle and sent the ball to the left side of the net. However, the goalkeeper guessed correctly and stopped the penalty.

It looked like the Nor’easters were going into the half with a 2-1 lead. However, the Red Bulls had other ideas. They led a counterattack after Fernandes launched a free kick into their defense. Brian Saramago received the ball near the top of the box and put one into the bottom left corner, just out of Hoffelner’s reach to tie the game up 2-2.

The second half saw one change to start as Marco Torino (St. Peters / Rome, Italy) came on for Austin Bihlmeyer (Eastern Tennessee State / Knoxville, TN). Two yellow cards were issued during the first 15 minutes of play in the second half: one to the Nor’easters and one to the Red Bulls.

The best chance, in the second half, and possibly the game, came in the 64th minute. A rapid fire of Nor’easter shots started when Brandon Smalley (Florida Tech / Bridlington, England) had his shot blocked by the opposing goalkeeper. The ball then landed at Maric’s feet who took a touch to his right and released another shot, which was blocked by an opposing defender. Finally, the ball landed at Torino’s feet about 10 yards away from the goal, but his shot sailed over the crossbar.

Physical play continued throughout the entire second half. In the 81st minute, Williams received a yellow card for a sliding challenge, the third booking of the game.

The third and final Nor’easter substitution of the night came in the 86th minute when Joey Bhangdia (Pennsylvania / Lewisburg, PA) replaced Smalley.

After one minute of stoppage time, the referee blew the final whistle, ending the game in a 2-2 draw.

The Nor’easters hit the road for their next USL League Two game on Saturday, June 15 when they will take on long-time rival Reading United who are currently undefeated and sitting in first place in the division. Kickoff is scheduled for 7 p.m. at Wilson High School in West Lawn, PA. It will be the 48th meeting between the two clubs in one of the longest-running rivalries in USL League Two