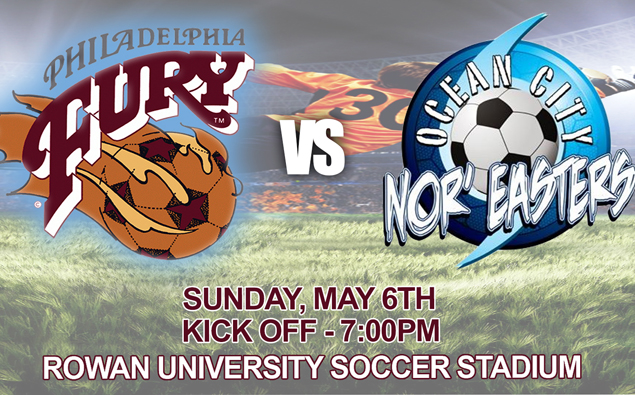 UPDATE (5/4): Due to a scheduling conflict with the venue, Sunday's friendly with the Philadelpiha Fury has been moved to Carey Stadium ("The Beach House") on Sunday. Kickoff is still 7 p.m. but admission to the game will be FREE! Come out and support the Nor'easters as they kick off the 2018 season with a very busy week.

The Ocean City Nor'easters will continue their preparation for next week's opening match in the 2018 Lamar Hunt US Open Cup with an exhibition game. The Nor'easters will take on the Phialdelphia Fury at Carey Stadium ("The Beach House") on Sunday, May 6. Kickoff is scheduled for 7 p.m.

Tickets to the game are free.

The Fury are a professional side that competes in the American Soccer League (ASL). The Fury have reached the ASL championship game in each of the last two years. Last year, they finished the season undefeated (20-0-0) and lifted the trophy with a 3-1 win over Mass United FC on the very field they will play the Nor'easters this Saturday.

The Fury's President and CEO Matt Driver is a familiar face to many long-time Ocean City fans. Driver was the club's first-ever head coach when the club launched during the 1997 season in the USL's D-3 Pro League. He led the club, then known as the South Jersey Barons, to the 1999 league championship game and remained in charge of the team until midway through the 2002 season when he resigned to take a coaching job with the New England Revolution of Major League Soccer. With a 53-38-2 record, Driver remains the winningest coach in club history.

The Nor'easters are preparing for next week's road game against AFC Ann Arbor of the NPSL in the opening round of the 105th edition of the Lamar Hunt US Open Cup. The Nor'easters will travel to Ann Arbor, Mich. for a game on May 9 with the winner advancing to Round 2 to take on the USL's Charlotte Independence. Following the US Open Cup match, they will return to the East Coast where they will travel to New York to take on FA Euro in the club's PDL opener on Saturday, May 12.