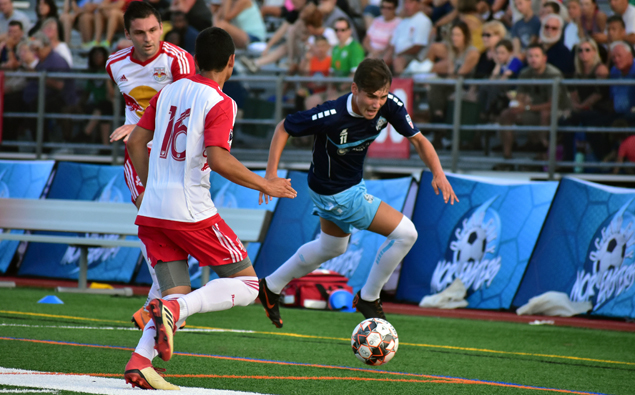 With the victory, the Nor'easters finish the season ranked No. 16 in the PDL among all of the US-based clubs, which most likely will qualify them for the 2019 Lamar Hunt US Open Cup. The format for the 2019 US Open Cup has not been finalized but based on recent formats, the Storm are expected to make the cut.

Unfortunately, the Nor'easters compete in the Mid-Atlantic Division, which is arguably the toughest division in the PDL. A 9-5-0 record (27 points) is good enough for second place in eight of the other 10 divisions in the league, but is only good enough for fourth place in the Mid-Atlantic. So while the Nor'easters fell four points shy of qualifying for the playoffs, they have a third straight berth in the US Open Cup to look forward to next season.

Ocean City could not have asked for a more perfect start to the game when Fredlin "Fredinho" Mompremier (Fairleigh Dickinson / Limbe, Haiti) was tackled inside the box and drew a penalty shot in the sixth minute. Corfe took the penalty kick and fooled the goalkeeper by slotting the shot into the bottom corner to give the Nor'easters the early lead. With Corfe's sixth goal of the season, the Wright State product finishes as the club's leading scorer in all competitions (6 goals, 7 assists).

The Nor’easters doubled the lead in the 34th minute. This time it was Ignacio Tellechea (Cal-Santa Barbara / Madrid, Spain) who fed the team’s leading goalscorer Alex Rose for his eighth goal of the season. As Tellechea came into goal scoring territory he passed the ball behind him to Rose who buried the ball in the back of the net.

The Red Bulls cut the lead in half in the 69th minute. John Denis got his head to a Bertrand Fourrier cross and sent a glancing header to the near post. Denis was the danger man all night for the Red Bulls. During the final five minutes of the first half Denis took a pair of free kicks that tested Nor'easters goalkeeper Todd Morton (Delaware / West Chester, PA), but the Delaware product was up to the task on both occasions. In the 90th minute, Morton made a tremendous save on Denis to preserve the victory. It was one of Morton's four saves on the night as he earned his sixth win of the season.

With the win, Morton wins his 12th career league game with the Nor'easters which moves him into a tie for second place on the club's all-time goalkeeper wins list. Morton joins Adam Edwards (2006-07) and current Philadelphia Union netminder John McCarthy (2011-12).

The Nor'easters improve their all-time record against the Red Bulls to 4-3-2, and the win also maintains their undefeated record (3-0-2) against New York in games played in Ocean City.

As the Nor'easters' 22nd season comes to a close, the entire organization would like to thank all of our loyal sponsors and all of our fans who came out to support the team at the Beach House this year. We look forward to seeing all of you next season!