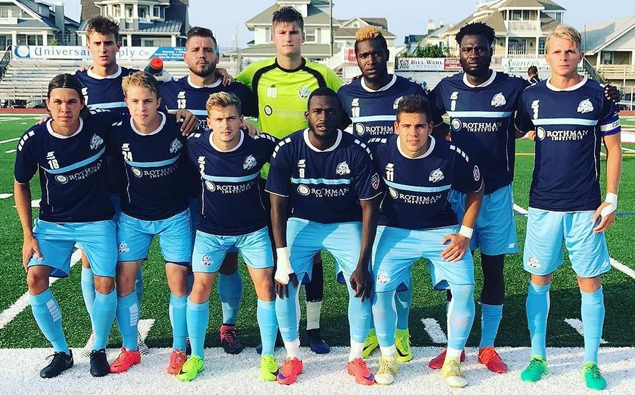 The Ocean City Nor'easters capped off the 2017 PDL campaign in style with a 5-0 win over Lehigh Valley United at Carey Stadium on Wednesday night. Five goals was a season high for the Nor'easters who avenge a loss to Lehigh Valley from earlier in the season It was a stellar performance from the forwards as Ismael Noumansana (Lenoir-Rhyne / Bamako, Mali) scored twice and Fredlin "Fredinho" Mompremier (Fairleigh Dickinson / Limbe, Haiti) added one goal and two assists to end the season on a positive note.

The Nor'easters finish the season in third place in the Mid-Atlantic Division with a 9-4-1 record. Despite finishing with 28 points, one point more than last year, a change in playoff format has them on the outside looking in when it comes to the postseason. There is a positive takeaway: Wednesday's win likely will qualify Ocean City for the 2018 Lamar Hunt U.S. Open Cup. If the format for the 2018 national tournament remains the same as the 2017 edition, then the top 21 teams in the PDL will qualify. With the victory over Lehigh Valley, Ocean City guarantees that they will not finish any lower than No. 21 in the overall league standings. The format for the 2018 U.S. Open Cup is expected to be announced in the coming months.

The Nor'easters got things started very early as Fredinho scored in the 8th minute. Ignacio Tellechea (West Virginia Tech / Madrid, Spain) sent in a long ball over the top and it was left to Fredinho to beat Lehigh defender, and former Nor'easters player, Seiji Rose. He won the battle and smashed it past goalkeeper Ben Sauer to open the scoring.

There were a couple more chances for the Nor'easters in the first half but they could not convert and went into the half with a 1-0 lead.

A match-altering incident occurred in the 56th minute after Kazari Trought was shown a second yellow card for a more than questionable decision to catch the ball out of the air. The ball was sailing over his head when he jumped up and grabbed the ball with both hands. He must have thought he was out of bounds at the moment, but the referee showed him the second yellow for a deliberate handball and was sent off.

United, playing with 10 men, paid for it three minutes later when Francisco Neto (West Virginia Tech / Rio De Janeiro, Brazil) doubled the Nor'easters' advantage. Fredinho fizzed the ball on the ground in the box and the Brazilian took a touch before thumping it home.

In the 74th minute, John Schroeder (Delaware / Houston, TX) got into a fantastic attacking position and passed the ball off to Noumansana who stepped around the goalkeeper and easily tapped it in to an empty net.

Already up three goals, Ocean City was awarded a penalty in the 85th minute after Santiago Castro took down Fredinho in the box. Tellechea grabbed the ball quickly and stepped up to the spot with confidence. In the 86th minute, he scored to the bottom right corner. Sauer guessed the right way, but dove a little too late.

In the 89th minute, the Nor'easters got the fifth and final goal in a great link-up between Noumansana and Fredinho. They passed the ball back and forth before Noumansana curled a brilliant ball to the top right corner with what was the last and best goal of the night.

Todd Morton (Delaware / West Chester, PA) kept a clean sheet for the fourth time this season. That is the most shutouts in a single season by a Nor'easters keeper since 2012 when current Philadelphia Union keeper, John McCarthy had five. Morton finishes with a 6-3-1 record and a 0.80 goals against average.

The Nor'easters are now unbeaten in nine straight home games in the regular season dating back to last year. Ocean City improves to 5-1-0 all-time vs Lehigh Valley United.

The regular season may be over for the Nor'easters but they still have one more game. On Saturday, July 15, they will host the D.C. United Under-23s in an exhibition game at the Beach House. Kickoff is scheduled for 7 p.m.