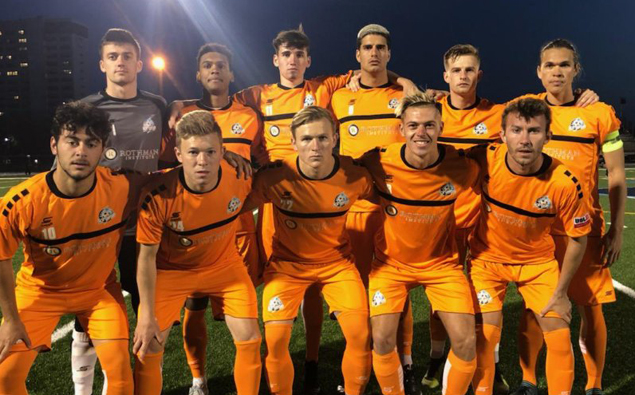 It took almost 80 minutes for the Ocean City Nor'easters to break a scoreless deadlock in the team's 2019 USL League Two season opener against FA Euro New York. However, it took just three minutes to lose that lead as FA Euro scored on their only shot on goal of the game.

The Nor'easters were ultimately held to a 1-1 draw at Poly Prep in Brooklyn.

Aside from the one goal allowed, the Nor’easters defense was rock solid, only allowing six shots from the home team, with goalkeeper Jan Hoffelner (St. John’s / Frankfurt, Germany) not having to make a single save in the ballgame.

For the Nor’easters, they extend their season opener unbeaten streak to four games.

The first half produced multiple chances for the Storm with most of them involving Corfe as the playmaker. In the first few minutes, Corfe stole the bll and played it to Claudio Repetto (Coastal Carolina / Genova, Italy) who had his shot saved by FA Euro goalkeeper Babucarr Ceesay. A few minutes later, Corfe sent Ilias Kosmidis (High Point / Thessaloniki, Greece) a through ball in behind the defense, but he hit his shot just wide of the target.

Repetto would test Ceesay from distance around the 30th minute minute but his shot went right at the netminder and was caught easily.

In the later part of the first half, after a throw in, Corfe caught the goalkeeper off his line and took a shot from 30 yards out off the bounce. He beat the keeper, but the ball sailed just over the crossbar.

Around the 40th minute, Brandon Smalley (Florida Tech / Bridington, England), who was making his Nor’easters debut after missing last season due to injury, nearly created a goal. Smalley played the ball in to Corfe who found himself one-on-one with the goalkeeper. Corfe was able to get his shot past Ceesay but didn’t strike it well enough and the FA Euro defense was able to intercept it before it crossed the line.

Ocean City continued to create chances after the halftime break as Kosmidis tried to launch a shot from 30 yards out about 10 minutes into the second half. His shot would be saved by Ceesay to keep the game scoreless. The Nor’easter would bring in some fresh legs midway through the half in an attempt to break the scoring drought.

The Nor’easters’ goal would finally come on a counter attack in the 80th minute. It started with last year’s Defender of the Year Williams N’Dah intercepting a pass into the penalty area and quickly playing a ball on the ground to start the attack with Ryan Inman (High Point / Birmingham, England). Inman immediately turned up field, and found Corfe at midfield who carried the ball into FA Euro territory in the center of the field, laid it off to his left where Twizer ran on to it and beat the goalkeeper at the top of the box to score the Nor’easters first goal of the year.

Unfortunately, FA Euro’s only goal of the game was a result of their only shot on goal. In the 83rd minute, after the Nor’easter backline cleared a cross away to the right wing, an FA Euro player won the ball in the air and lofted a cross into the box to the far side of the penalty area. Defender Tomasso Davico tracked down the ball on the left side of the box, fired a shot, and second half sub Karamba Janneh redirected it into the back of the net from inside the six yard box to tie the game.

“The result wasn't what we wanted but the boys worked hard and did what we asked of them,” said Nuss. “We have to get back to training and prepare for Long Island.”

The Nor’easters will be back in New York for their next league game on Wednesday, May 22 when they travel north to take on the Long Island Rough Riders at Hofstra University. Kickoff is scheduled for 7:30 p.m.