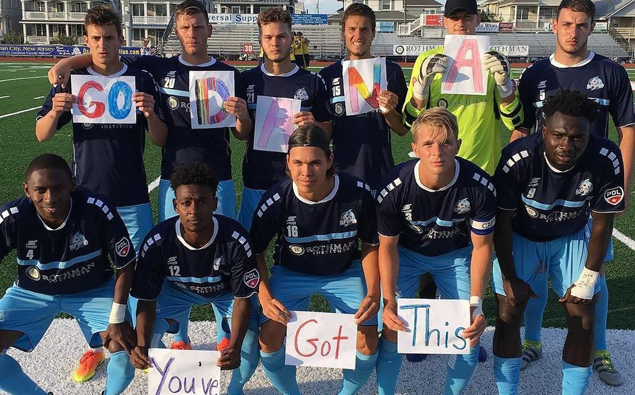 The Ocean City Nor’easters returned home to the Beach House and defeated FA Euro New York by the score of 1-0 on Sunday night. With the win, Ocean City is alone in second place in the Mid-Atlantic Division, with rival Reading United three points behind with three fewer games played. The top two teams in the division qualify for the PDL playoffs.

Max Hemmings (Wokingham, England / Georgia State) scored his first goal of the season with a short kick from a pass from Akeil Barrett (Kingston, Jamaica / Tulsa) past FA Euro keeper Brian McFartland to give Ocean City the early lead. Thanks to a strong performance by the Ocean City backline, goalkeeper Todd Morton (West Chester, PA/Delaware) earned his second clean sheet of the season.

“It was good to get a win at home in front a nice crowd tonight, which keeps us in the playoff push with three points,” said Nor’easters head coach John Thompson. “We had loads of chances, we rushed it a bit in the final third and couldn’t put our chances to bed. We let them stay in the game and should have shut them out with a second goal.”

Making his season debut in the Nor’easters starting lineup was John Manga (Lexington, KY / Cincinnati) after recently signing with the club. Manga, who was the second leading scorer for the Nor'easters in 2015, returned to Ocean City after a stint with the Pittsburgh Riverhounds of the United Soccer League. The Riverhounds, who recently announced a developmental agreement with the Nor'easters, released Manga, which will allow him to get some consistent playing time as he looks ahead to preparing for the 2018 pro season.

While the defense performed well, Thompson was happy with the way the Ocean City offense kept control of the match.

With the win, Ocean City extends their regular season home winning streak to six games (dating back to 2016), while improving to 6-0-0 all-time against FA Euro.

The focus now shifts to a pair of back-to-back games against Reading United. On Thursday, June 29, Ocean City travels to Reading, Pa. to take on United at Don Thomas Stadium (7:30 p.m. kickoff) in a replay of last Friday's match that was postponed due to a power outage and a lightning delay.

Then, the Nor'easters return home to Carey Stadium to Saturday, July 1 to host Reading. Kickoff is scheduled for 7 p.m. With the New York Red Bulls Under-23s sitting six points clear in first place, the Ocean City-Reading matches could go a long way to determining the front-runner for the second and final playoff spot in the Mid-Atlantic Division.