Ocean City will play USL's Charlotte Independence in Round 2 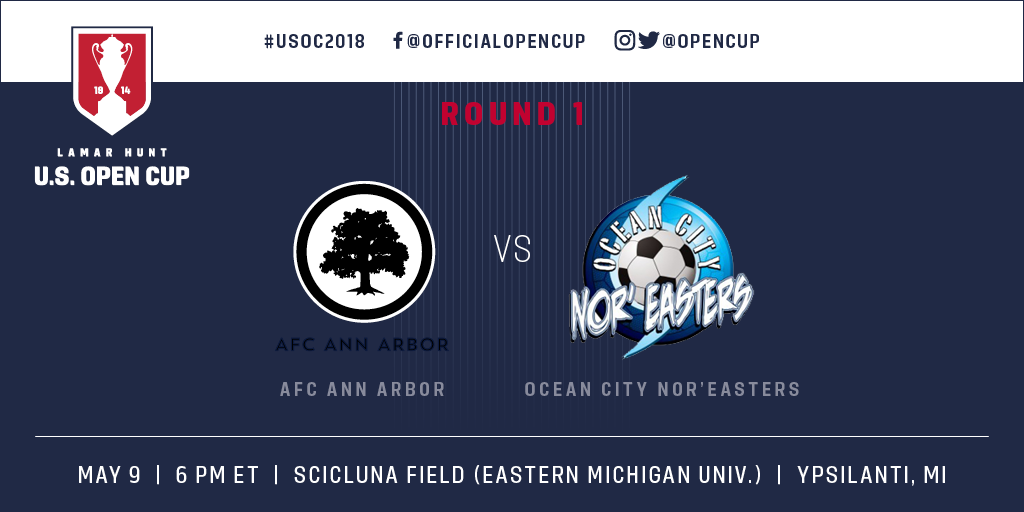 The Ocean City Nor'easters are departing today for Southeast Michigan to take part in the Lamar Hunt US Open Cup for the ninth time in franchise history. The Nor'easters will face off with AFC Ann Arbor of the National Premier Soccer League (NPSL) in the First Round of the 105th edition of the oldest cup competition in the United States.

The game will take place at Scicluna Field on the campus of Eastern Michigan University in Ypsilanti, Mich., just a few miles away from Ann Arbor. Kickoff is scheduled for 6 p.m.

This marks the first time since narrowly falling to the Philadelphia Union (MLS) in the 2013 US Open Cup that the Nor'easters will play a road game in the tournament.

AFC Ann Arbor is entering its fourth year as a club, its third year as a member of the NPSL. The "Mighty Oak", as they are known, have seen a lot of success in their first two years in the league. They have made the playoffs in both seasons, including a second place finish in 2016, followed by winning the Great Lakes West Division this past season with a 12-1-1 record. They also featured one of the best defensive marks in the league, allowing 9 goals in 12 league matches.

Ann Arbor made their US Open Cup debut last year, losing a close First Round match with PDL powerhouse Michigan Bucks, 1-0 on the road.

While this will be the Nor'easters first competitive game of the season, Ann Arbor has just one league game under their belt. Last Saturday, the Mighty Oak defeated the Milwaukee Torrent on the road by the score of 4-0.

Ocean City had an exhibition game at Carey Stadium ("The Beach House") on Sunday against the Philadelphia Fury, a pro team from the American Soccer League. Simone Raiola, an NAIA All-American from Grand View University (Ia.) scored for Ocean City, but the club fell 2-1 to the defender ASL champions.

The winner between Ocean City and AFC Ann Arbor will advance to the Second Round where they will face the Charlotte Independence of the United Soccer League. The game will be played on May 16 at the Mecklenburg County Sportsplex in Matthews, N.C., near Charlotte. Kickoff is scheduled for 7 p.m. The USL is a professional league ranked just below Major League Soccer (MLS).

Modeled after England's FA Cup, the US Open Cup is a single-elimination tournament that is the second-oldest continually-operating competition of its kind in the world and has been the national championship for the United States since it launched in 1913. The tournament is open to professional and amateur teams from MLS to Sunday beer league teams and everything in between.

The 105th edition of the US Open Cup will feature 97 teams, 20 of them from the PDL. Based on their 9-4-1 regular season record last year, the Nor'easters were among the Top 20 teams in the league and qualified for the 2018 edition of the competition.

The Nor'easters are one of the most successful amateur teams in the country when it comes to the US Open Cup. Only two amateur teams in the country (Michigan Bucks and the Des Moines Menace, both of the PDL) have more Open Cup wins (10) and professional team upsets (5) than Ocean City has as a PDL team. Of those five wins over professional opposition, all of them were shutouts in front of their home fans at Carey Stadium, outscoring the pros by a combined score of 10-0.

The first pro upset came in 2005 with a 4-0 win over the Long Island Rough Riders (USL-2). The next two upsets came in 2007 and 2009 against the same team, Crystal Palace Baltimore. They followed up that 2009 win with a second straight stunner, a 1-0 extra time win over the Real Maryland Monarchs (USL-2). That earned them a date with D.C. United of Major League Soccer. They traveled to Maryland and lost a close 2-0 decision to the defending Open Cup champions.

In 2013, the Nor'easters claimed their fifth professional victim with a 1-0 win over the Pittsburgh Riverhounds (USL), which earned them they advanced to Round 3 again where they had a chance to upset the Philadelphia Union (MLS). In that game, Emmanuel Kollie scored a 90th minute equalizer for Ocean City at PPL Park, but their upset hopes were dashed when the Union scored a controversial game-winner in second half stoppage time.