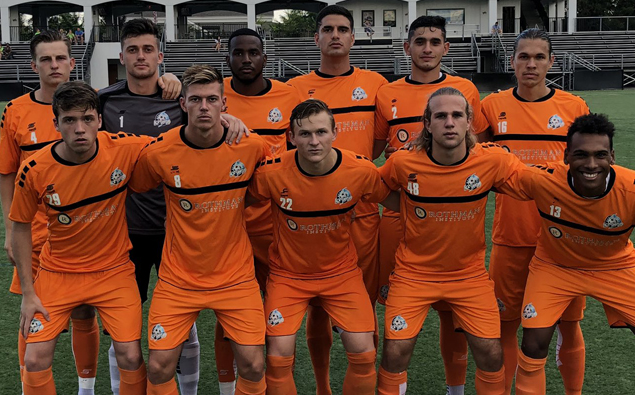 The Ocean City Nor'easters needed a 90th minute penalty kick goal from Claudio Repetto (Coastal Carolina / Genova, Italy) to salvage a 2-2 draw against Evergreen FC. It was Repetto's second penalty kick goal of the game, who extended his goalscoring streak to four games and finishes the night with seven goals on the season.

With the draw, the Nor'easters have a 5-3-4 record and extend their unbeaten streak to five games (3-0-2). The team currently sits in third place in the Mid-Atlantic Division, just one point behind the second place Long Island Rough Riders.

It was the final road game of the season for the Nor'easters who despite rescuing a point on the road, had their playoff hopes take a hit. Now, Ocean City must both of their remaining home games (July 7 vs. Reading United, July 14 vs. Long Island Rough Riders) and need GPS Portland Phoenix, North Carolina FC U-23s, and division rival Long Island Rough Riders to drop points in their remaining games.

"Unfortunately we weren't sharp tonight and we paid for it," said Nor'easters head coach Kevin Nuss. "We missed too many chance to put the game away and we made mistakes to let Evergreen in the match. We showed good fight to create chances until the end and get the penalty in the final minutes but we only have ourselves to blame for not getting all three points."

The Nor'easters had the better of the chances early in the game. In the 11th minute, Repetto launched a shot that hit the side netting to get the goalkeeper's attention.

Five minutes, later Kwesi Allen (Drexel / Port of Spain, Trinidad and Tobago) scored what appeared to be the opening goal of the game, but the assistant referee ruled he was offside.

Repetto had another chance in the 19th minute when Brandon Smalley (Florida Tech / Bridlington, England) fired a shot toward goal only to see it blocked by a Hammers defender. The ball fell back to Smalley who lofted a pass over to Repetto who nodded the ball just over the bar.

The breakthrough would finally come in the 24th minute when Matteo Bennati (Ohio State / Genova, Italy) was taken down from behind in the penalty area and the referee pointed to the spot. Moments later, Bennati, who was making his second straight start, watched as his fellow Genova, Italy native, Repetto, step to the spot and score the penalty kick to give Ocean City the lead.

A dangerous Evergreen FC free kick just before halftime had to be cleared out by the Ocean City backline. That pressure on the Nor'easters defense carried over into the second half as the Hammers scored two goals in the first 12 minutes.

Down 2-1, the Nor'easters pushed for the equalizer and nearly found it in the 62nd minute. Smalley dribbled into the box and launched a shot on goal that was saved by the Hammers goalkeeper. The rebound fell to Bennati but the ball was pounced on by the keeper before he could get a shot off.

Jan Hoffelner (St. John's / Frankfurt, Germany), making his 12th straigth start for the Storm, made a point-blank save in the 85th minute to keep the game at a one-goal deficit. This proved to be vital as Bennati and Repetto would come through in the 90th minute.

"Claudio showed great composure to put the two away from the penalty spot," said Nuss. "We need to refocus and get ourselves ready for a big match against Reading [on Sunday]."

The result, not only kept the Nor'easters' slim playoff hopes alive, but it also kept their unbeaten streak against Evergreen FC alive. Ocean City is now 14-0-2 all-time against the Hammers, dating back to their first-ever meeting back on July 4, 2004. It was the first time they dropped points against Evergreen since a 1-1 draw back on May 22, 2010.

The Nor'easters have three games remaining on their home schedule before the 2019 regular season wraps up. Next, they will host Reading United AC at the Beach House on Sunday, July 7 in what will be the 50th all-time meeting between the two long-time rivals. After that, the Storm will host the NPSL's Philadelphia Lone Star FC in a friendly on Wednesday, July 10. Then, the regular season finale will take place on Sunday, July 14 when Ocean City hosts the Long Island Rough Riders. All games will kick off at 7 p.m.