She's back! Nor'easters happy to welcome 14-year-old anthem singer back to the Beach House for 2019

Since singing the anthem for the Nor'easters in 2018, Olivia Currier has added Philadelphia Eagles, New Jersey Devils, Toronto Raptors and many others to her singing resume 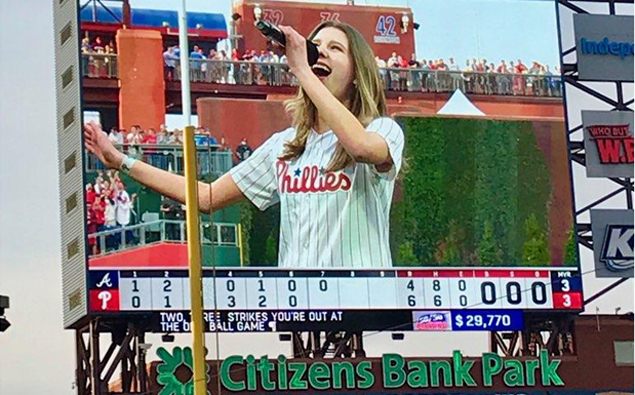 For nearly a quarter of a century, the Ocean City Nor'easters have taken a lot of pride in seeing players represent the club and then move on to bigger and better things. This pride in talented youngsters has extended beyond soccer as the Nor'easters are excited to welcome Olivia Currier back to the Beach House in Ocean City, N.J. to sing the national anthem during the 2019 USL League Two season.

This will be the third season that Currier has sung the national anthem for the Nor'easters. She made her debut at the age of 12 during the 2017 season. She made such an impression the club invited her back in 2018 to be the club's primiary national anthem singer and are welcoming her back for her second full season in 2019.

Since last summer Currier has added to her already impressive singing resume. Over the last nine months, the talented 14-year-old Philadelphia native has performed national anthems for some of the biggest professional sports teams in the country, including the Philadelphia Eagles (NFL), the Pittsburgh Pirates (MLB), the Washington Wizards (NBA), the New Jersey Devils (NHL). Currier also performed double duty, singing both the United States and the Canadian national anthems for an NBA game between the Orlando Magic and the Toronto Raptors, and for an NHL game between the Carolina Hurricanes and the Toronto Maple Leafs. She even sang "Take Me Out To The Ballgame" at a Philadelphia Phillies (MLB) game (WATCH THE VIDEO BELOW) and traveled to Dublin to sing the Irish national anthem in Gaelic at a Sean Keane concert (famous Irish fiddler).

One upcoming gig that she's looking forward to is coming up next month when she will be singing the anthem for the nationally-televised NCAA men's lacrosse national championship game at Lincoln Financial Field on May 26.

Currier's dream of performing on stage started very early on. She takes musical theater and acting classes at the Walnut Street Theatre in Philadelphia and studies at the Koresh Dancy Academy. She will also be attending the Philadelphia Creative and Performing Arts High School in the fall where she will major in musical theater. She's been a regular in school musicals over the years, including a role in an upcoming production of James and the Giant Peach.

"Olivia started singing at the age of five in musical theater," said Olivia's mother Lori Currier. "She has always loved singing and acting from a very young age. She really relishes the spotlight."

She has performed at some of the biggest sports stadiums in the country and is very comfortable singing in front of big crowds.

“I feel exhilarated to be singing in front of thousands of fans at such a young age,' said Currier, who made her national anthem debut at age of nine at a Villanova University women's basketball game. "I am humbled to have such unbelievable opportunities. I know this will benefit me as I pursue my dream career in musical theater.”