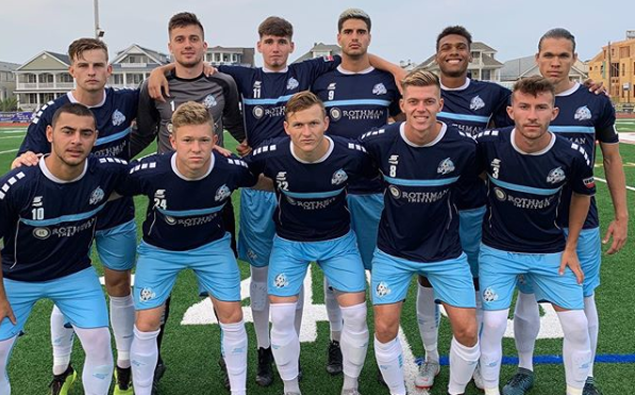 The Ocean City Nor’easters opened up their home slate of the 2019 match schedule at Carey Stadium ("The Beach House") with a 2-1 victory over the Evergreen FC Hammers. Ilias Kosmidis (Thessaloniki, Greece/High Point University) was the hero, scoring a late game-winning goal to give the Nor'easters a win in their home opener for the fourth year in a row.

"We were a bit unlucky at times not to convert our chances but the boys showed great focus to keep working," said Nor'easters head coach Kevin Nuss. "They really stayed committed to the way we wanted to play."

The Nor'easters improve to 2-1-1 on the young season and are just five points out of first place.

The weather was perfect, but the physicality heated up on the field as both teams got after it.There were many corners and set pieces in the first half, but none were as juicy as the one in the 15th minute, when Williams N'Dah (Univ. of Charleston / Rome, Italy) had an absolutely gorgeous header saved in the bottom left-hand corner.

A few seconds later, the Nor’easters put the ball in the back of the net, only for the goal to be waved off due to an offside ruling.

There was no reason to fret for Nor’easter fans, because in the 21st minute of the match, Brandon Smalley (Florida Tech / Bridlington, England) passed to Deri Corfe (Chester, England/Wright State University) who scored the first goal of the match to give the Nor’easters the 1-0 lead. For Corfe, it was his team-leading third goal of the season.

Not much longer after that, however, Evergreen was given a penalty shot in the 28th minute, which was buried by DJ Charlton to tie the score up 1-1. In another scoring chance, Smalley would ring a ball off the post but the Storm were unable to put in the rebound as the half would end tied.

The physicality continued in the second half with yellow cards and set pieces galore.

In the 85th minute of the match, the Nor’easters broke through once more, as Smalley dished out his second assist of the game to Kosmidis who buried a tap-in to give him his first goal in an Ocean City uniform and to give the team a 2-1 lead. This would end up being the final score.

With the win, Ocean City extends their unbeaten streak against Evergreen FC to 15 games. The Storm improve to 14-0-1 all-time against the Hammers, dating back to their first meeting in 2004.

Next up for the Nor'easters, they will head back on the road to Farleigh Dickinson University where they will take on the expansion side Cedar Stars Rush for the first time on June 5 (Kickoff: 7:30 p.m.)

The next home game for Ocean City is on Friday, June 7 when they take on the NPSL's Atlantic City FC in an exhibition game. Kickoff is scheduled for 7 p.m.