Rose, Hemmings and Reese all score in a 3-2 win over United at the Beach House 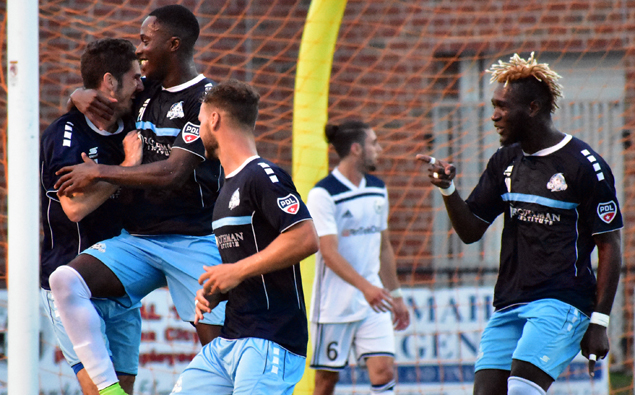 The Ocean City Nor'easters' playoff hopes may be out of reach, but with a 3-2 win over Lehigh Valley United on Wednesday night, their goal of qualifying for the 2019 Lamar Hunt US Open Cup is alive and well.

"Once again we created many clear-cut opportunities, and we finished some of them, but we need to be more clinical in the next two matches to get the wins we need to qualify for the US Open Cup," said Nor'easters head coach John Thompson.

With the win, the Nor'easters have put themselves in prime position to qualify for the 2019 US Open Cup. The format for next year's tournament has yet to be announced, but over the past five years, a minimum of 19 teams from the Premier Development League (PDL) have qualified for the Open Cup. In 2017, the top 21 US-based teams in the overall standings qualified, and the top 20 qualified in 2018.

The Nor'easters wrap up a busy week with two games this weekend to close out the 2018 season. Friday, they host the D.C. United Under-23s in an exhibition game at the Beach House (6 p.m. kickoff), then they welcome the New York Red Bulls Under-23s for the season finale in Ocean City on Sunday (7 p.m.). A win over the Red Bulls will likely be enough to punch Ocean City's ticket to the 106th edition of the US Open Cup.

It was ideal summer weather at The Beach House in Ocean City as the Nor'easters got on the scoresheet in the opening 10 minutes for the second game in a row.

Deri Corfe (Wright State / Chester, England) fed the ball to Max Hemmings who beat United goalkeeper Michael Kennelly to make it 1-0. It was Hemmings' third goal of the season, which combined with his three assists ranks him fifth on the team scoring list.

In the 25th minute, Finn Reese scored his first Ocean City goal. Once again, Corfe was the playmaker as he sent a free kick into the box where the German defender hit a glancing header into the back of the net. For Corfe, it was his 7th assist in all competitions this year, which leads the team.

After halftime, the Nor'easters doubled the lead. In the 59th minute, Fredinho dished out his sixth assist of the season when he found Alex Rose in the box who scored to extend his point streak to four games (5 goals, 1 assist).

It looked like the Nor'easters were going to pull away but Lehigh Valley pulled one back three minutes later. Enowbi played creator this time as he delivered a ball into the box where Cole Kropnick headed it home from close range to cut the Ocean City lead to 3-2.

The final half-hour of the match saw quality chances from both teams but the Nor'easters defense held strong to earn the club's fourth win in the last five matches.

With the win, the Nor'easters sweep the three-game season series over Lehigh Valley and improve their all-time record against United to 8-1-0.