Kickoff is scheduled for 7 p.m. at the Beach House 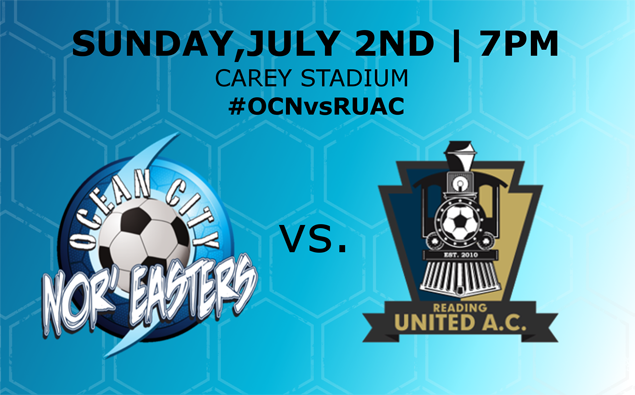 The Ocean City Nor'easters return home to Carey Stadium on Sunday night to face long-time rivals Reading United. Any game against Reading is an important one between the two clubs that have been playing each other since 1997, but Sunday's game has a little extra drama to it.

The Nor'easters currently sit three points behind second-place Reading, and with only the top two teams in the Mid-Atlantic Division qualifying for the playoffs, the game is a must-win for Ocean City. Even if they win, United will hold the head-to-head tiebreaker with the Nor'easters, and Reading has four games left in the season compared to Ocean City's two. To put it simply, the Storm need to win on Sunday, win their remaining two games, and hope that Reading can be held to five points or less in their remaining four games.

But the Nor'easters can only take it one game at a time. Starting on Sunday night.

Last Thursday, the Nor'easters put themselves in this position with a 2-0 road loss to United. Ocean City lost two of their top defenders in the first half, one due to injury (Daniel Nimmo) and the other to a red card (Nikola Fimic), and played the majority of the game down a man. Khori Bennett scored both goals for Reading.

It was a physical game, with 29 fouls between the two teams, including five yellow cards shown to the Nor'easters, compared to Reading's one.

The loss marked the first time that Ocean City has suffered back-to-back shutout losses to Reading since the first two games the two teams played back in July of 1997.

This will be the 45th all-time meeting between the two clubs, which is one of the oldest rivalries in modern American soccer. Ocean City leads the all-time series 19-18-7, which includes a win in last year's Eastern Conference championship game.

The Nor'easters are led by Fredlin "Fredinho" Mompremier (Limbe, Haiti / Fairligh Dickinson), who is the team's top scorer with six goals (seven in all competitions). Ismael Noumansana (Bamako, Mali / Lenoir-Rhyne) leads the team in assists with four. Todd Morton (West Chester, PA / Delaware), who started the first two games of the season against Reading is expected to get the start. He has earned the starting job for the Storm this year, posting a 1.17 goals against average, a 4-3-0 record with a team-leading two shutouts.

For Nor'easters head coach John Thompson, being at home for the rest of the season will help the team finish strong.

"We are looking forward to five home games on the bounce at Carey Stadium (three regular season games and two exhibition games)," said Thompson. "Four of them are against MLS Academy teams and we are looking for the players to play some good football for our home fans."

Fans unable to make it out to the Beach House for the game can follow the game online through the Nor'easters' Twitter account or listen to the game online or on the air through 91.7FM WLFR (Just click "Listen Live" and follow the instructions). Fans can also listen to the game at home on a Roku device or on a mobile device or tablet using the Shoutcast app (then just search for "WLFR").