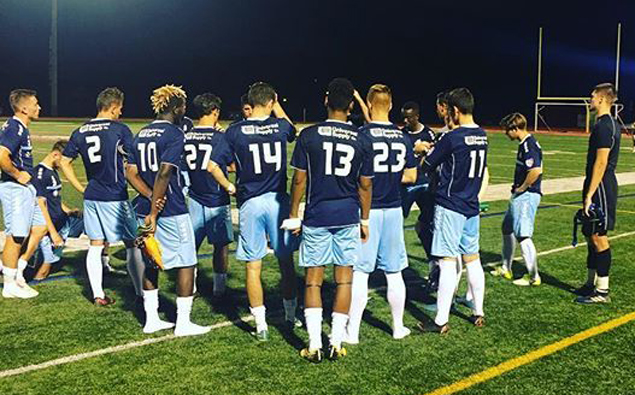 The Ocean City Nor’easters played on the road this past Saturday night, traveling to take on the division leaders, Reading United. This game marked the 46th match in a 20-year history between the two clubs. Ocean City (4-3-0) still clings to the all-time series lead at 20-19-7.

With the loss, the Nor'easters fall to 4-3-0 and are in fourth place in the Mid-Atlantic Division. However, the PDL playoffs are still in reach at the midway point of the season. The top two teams in the division qualify for the postseason and Ocean City is just seven points behind second-place Long Island with the Storm playing one fewer games than the Rough Riders.

Coming into the game, Ocean City was riding high with a three-game winning streak. But the United would prove to be too much for the Nor’easters and defeated the club 3-1. With this win, Reading continued its control of first place and stayed undefeated (7-0-1) in the process.

Ocean City would not be intimidated. The team came out firing on all cylinders when Fredlin "Fredinho" Mompremier (Fairleigh Dickinson / Limbe, Haiti) aimed a shot on net in the fifth minute of action, but missing his target. Unfortunately it would be Reading who scored first when Kalil El Medkhar found the back of the net in the 16th minute.

Reading added their second goal of the night in the 36th minute when 2017 PDL Young Player of the Year Aaron Molloy netted a rebound, taking advantage of Kalil El Medkhar’s missed bicycle kick.

Right before the halftime break, the Nor'easters pulled one back. Hemmings hit a splendid volley in the first minute of stoppage time and connected with Abdul Mansaray (Wilmington University/ London, England) who finished the play. Mansaray’s goal was his third in the last two games and his third on the season making him the top point getter for the club (three goals, one assist).

Reading added to their lead in the 50th minute with a goal by Felipe Hideki.

As the final whistle blew, the score ended 3-1 in favor of the home team. Ocean City will look to bounce back this coming Wednesday night, June 20 at the Beach House in a rematch. The game is sure to be high intensity and exciting from start to finish.