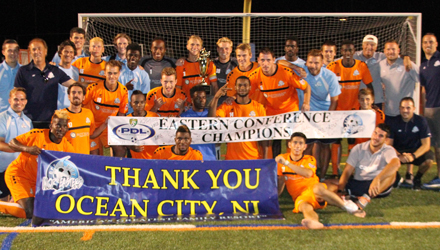 (NOTE: Watch a full replay of the match at the bottom of the page)

The Ocean City Nor'easters are the 2016 PDL Eastern Conference Champions after a 4-1 win against long-time rival Reading United. After trailing 1-0 at halftime, the Nor'easters rallied with four second half goals to win the club's second conference title in their PDL history (2013).

Nathan Regis led the offensive surge with a pair of goals and an assist. With that assist, the reigning NCAA Division II Player of the Year broke the single-season club record with his 10th asisst in all competitions.

The Nor'easters are now one of four remaining teams in the Premier Development League (PDL) playoffs. When Ocean City reached the PDL Semifinals in 2013, they fell 1-0 to the Austin Aztex. Nor'easters head coach Tim Oswald is hoping to use the experience from three years ago to finish the job and win the club's first league championship.

"We know what to expect this time around," said Oswald.

Ocean City came into Sunday's conference final at Don Thomas Stadium in Exeter, Pa. afer a 1-0 win over the top-seeded Charlotte Eagles with only 26 hours between kickoff times. Two wins in two days truly shows the fighting spirit within this squad.

They found themselves facing off against what Oswald called a "tremendous opponent" in their long-time rival Reading United with a spot in the PDL Semiinals on the line. It was the 42nd all-time meeting between the clubs dating back to 1997 but it was the first time the two clubs had met in the postseason.

The game started with the Nor'easters having some positive possession. A giveaway led to a Reading free kick just outside the box. Aaron Molloy buried the free kick in the 22nd minute to give the hosts the lead.

Ocean City was given a golden opportunity in the 36th minute when Regis was chopped down from behind in the penalty area. Mohamed Condé was shown a red card for the foul and the Nor'easters were given a penalty. Regis stepped up to take the penalty, which would have tied the game, but it was saved. He had a follow up effort that went just wide of goal. Ocean City was trailing 1-0 at half time, but had an advantage with Reading being down to ten men.

The Nor'easters finally found the equalizer in the 55th minute when Mutaya Mwape hit a stunner off the right post and in from a free kick.  It was his second goal at Don Thomas Stadium this year.  He took a gamble going to the keeper's side of goal on the set piece, but it paid off.

The Zambian was a major factor for Ocean City, playing a part in the second goal as well. Mwape's incredible footwork got him past three Reading defenders and he slipped the ball to Regis, who rifled it into the top right corner from close range in the 76th minute to take the 2-1 lead.

The hosts were struggling with only 10 players having played a match less than 24 hours prior to the kickoff of the final. Their fatigue led to great space in attacking areas late in the game for the Nor'easters.  Chevaughn "Chevy" Walsh got involved late.  The PDL's scoring champion played a well-timed through ball to Miguel Jaime, who calmly chipped the keeper from distance.  It was a delightful finish from the Denver native.

Minutes later, Regis added another goal on a breakaway.  Mwape brought the ball forward in acres of space.  Most of the defense was still forward trying to find a late goal to give themselves a chance for a late rally. Mwape once again used his great speed and agility to find Regis, who put home his second of the match in stoppage time.  This was the goal that put the icing on the cake.

The win not only puts the Nor'easters in the league's final four but it also ended an eight-game road winless streak (0-6-2) against United. The last win at Reading' s home stadium came on June 11, 2006.

Although the team has enjoyed success this season, they are not quite at the top just yet.

"We're taking this one game at a time," said Oswald after the game. "The goal is to always win the next one.  We still have a lot more to accomplish."