Nor'easters open 22nd season on May 19; home opener at the Beach House scheduled for June 3 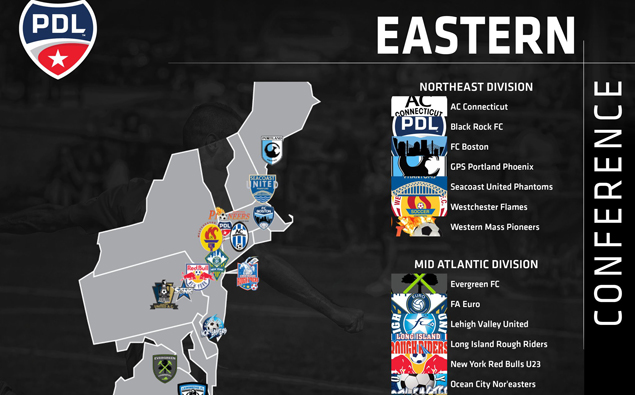 The Premier Development League (PDL) released the league schedule and alignment for the 2018 season on Thursday. The league will begin with 74 teams across North America split into 11 divisions.

This summer will mark the 22nd season for the Ocean City Nor'easters (16 of them in the PDL) as they are back in the Mid-Atlantic Division of the Eastern Conference for the eighth year in a row. The Nor'easters will kick off the 2018 season on Saturday, May 12 with a match on the road against FA Euro New York.

The Nor'easters' home opener will be on Sunday, June 3 as the team will host long-time rival Long Island Rough Riders at Carey Stadium ("The Beach House"). The Rough Riders, return to the Mid-Atlantic Division after two seasons in the Northeast Division.

The division will play a 14-game regular season schedule. The Nor'easters will face the Rough Riders, FA Euro New York, and defending Mid-Atlantic Division champion New York Red Bulls U23s in home and away matches and will play three games each against Lehigh Valley United (1 home, 2 away) and long-time rival Reading United AC (2 home, 1 away).

The club will be led by head coach John Thompson who will be in charge for his second straight season. Thompson took over last year for Tim Oswald who finished his five-year run as the winningest coach in the club's PDL history. Oswald has since moved to the club's front office where he is the Director of Soccer. Thompson played for the club from 2002-06 and was a two-time All-League selection and was named the 2004 PDL Defender of the Year.

"Our division looks to be very competitive once again with the addition of the Long Island Rough Riders, who, like ourselves, have a long tradition in the USL and the PDL," said Thompson. "Every club in the Mid-Atlantic Division attracts quality players and we all have excellent home facilities, making it one of the top divisions in the PDL."

Last year, the Nor'easters managed to improve on their regular season record that saw them qualify for the playoffs and ultimately win the 2016 PDL Eastern Conference championship. However, due to a change in playoff format, the Nor'easters fell just short of qualifying for the postseason with a 9-4-1 record and an unbeaten record at home (6-0-1). This season added to the club's impressive resume that ranks them about the best PDL teams in North America. Since joining the PDL in 2003, the Nor'easters are 130-60-44, which is the sixth-best record in the league. Ocean City's 130 wins ranks 8th in PDL history, which dates back to 1995.

"We are excited about the 2018 PDL season and look forward to having another winning year," said Nor'easters general manager Giancarlo Granese Jr. "Last year, we finished with nine wins but came up short of reaching the playoffs. This year we are looking to take it to the next level and return to the playoffs and win the club's first PDL championship. We are really looking forward to getting the season going and filling the Beach House with all our crazy fans."

While an official announcement has not been made by the United States Soccer Federation, the Nor'easters are also expected to be a part of the 2018 Lamar Hunt U.S. Open Cup. If they do qualify, it will be the club's ninth US Open Cup appearance. Ocean City has upset five professional teams in club history, the third-most of any amateur club in the country since 1995. Last year, after defeating Philadelphia's Junior Lone Star FC in the opening round, they took the USL's Harrisburg City Islanders to penalty kicks before falling 6-5. This was the sixth time that the Nor'easters earned a shutout against a professional team, something no other amateur team has done in the Modern Era (1995-present). According to the US Soccer Federation, the First Round of the 105th edition of the US Open Cup is scheduled to kick off on May 9.

Below is the complete 2018 schedule along with a profile of each opponent: