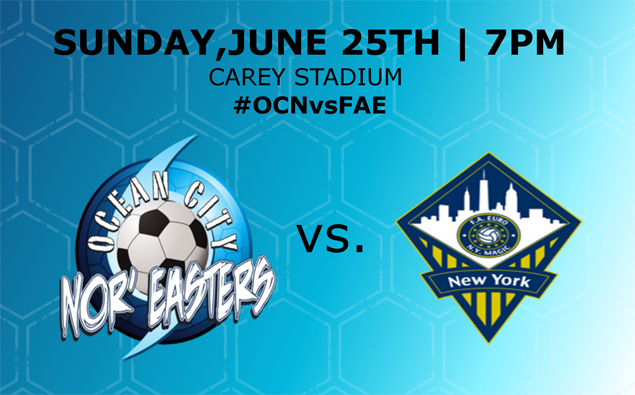 On Friday night, the Ocean City Nor'easters traveled to Reading, Pa. to add another chapter to the club's rivalry with Reading United AC. The winner of the game was set to take sole possession of the second and final playoff spot in the Mid-Atlantic Division, but Mother Nature wouldn't cooperate. After a scoreless first half, a power outage, combined with a lengthy lightning delay, forced the postponement of the game.

The game, which is the final regular season road game of the year, will be replayed on Thursday, June 29 at Don Thomas Stadium in Reading. Kickoff is scheduled for 7:30 p.m.

"We had some good momentum so it was a shame that Mother Nature denied us the second half against Reading United," said Nor'easters head coach John Thompson. "But in the PDL it's a quick turn around and there's always another match. This game is crucial to the final standings so we have to get full 90 minutes and both teams need a result.

"It was tough finding a date where both teams could fit in another game before the league deadline as the schedules are so compact," Thompson added. "Now we look forward to taking this momentum into the game against FA Euro at home on Sunday night."

Now, the Nor'easters will shift their focus to Sunday's home game against FA Euro New York. Ocean City will host the game at Carey Stadium at 7 p.m. looking to sweep the season series and keep the club's playoff hopes alive.

The last time these two teams met was back on May 27 when the Nor'easters picked up a 1-0 road win on a 34th minute goal by Francisco Neto. Jimmy Slayton earned his first PDL shutout as Ocean City improved to 5-0-0 all-time against FAE.

Fredlin "Fredinho" Mompremier is the top scorer for the Nor'easters with six goals (seven in all competitions), with Ismael Noumansana leading the team in assists with four.

Last Saturday, FA Euro snapped a five-game losing streak with a 3-2 win over Lehigh Valley United. However, the celebration was short-lived as they suffered a 5-0 home loss to Jersey Express on Wednesday. Scoring goals has been the main problem for Sunday's visitors as they have just five goals scored in eight matches. Jason Lampkin is the team's leading scorer with two. Brian McPartland has played in the majority of the games in goal, and has a 1.80 goals against average.

Fans unable to attend the match at the Beach House can listen to the game live on 91.7FM WLFR online and receive in-game updates on the Nor'easters Twitter account.