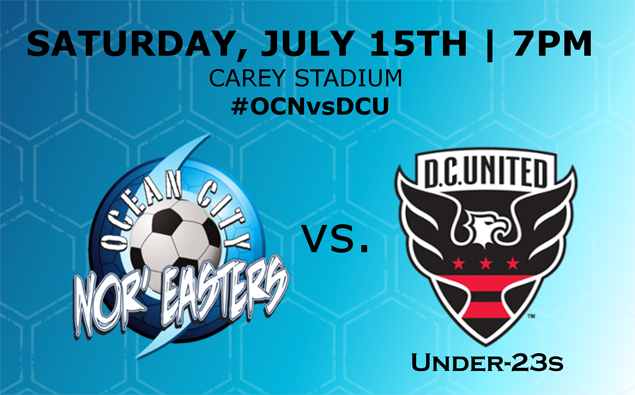 The Ocean City Nor’easters will close out the 2017 season when they welcome the D.C. United Under-23s for an exhibition game at Carey Stadium on Saturday night. Kickoff is scheduled for 7 p.m.

This will be a rematch of last year's friendly played between the two teams. On May 21, 2016, the Nor'easters used the game as a way to prepare for the team's season opener. Ocean City won the game 3-0 with goals by future PDL MVP Chevaughn "Chevy" Walsh, Tim Ogunniyi, and future team MVP Nathan Regis.

The Nor'easters are coming off a 5-0 win over Lehigh Valley United at the Beach House on Wednesday night to cap off the 2017 Premier Development League (PDL) season. Five goals was a season-high for the Nor'easters who was led by Ismael Noumansana (Lenoir-Rhyne / Bamako, Mali) who scored twice. Fredlin "Fredinho" Mompremier (Fairleigh Dickinson / Limbe, Haiti) added one goal and two assists to end the season on a positive note.

The Nor'easters finished the season in third place in the Mid-Atlantic Division with a 9-4-1 record. Despite finishing with 28 points, one point more than last year, a change in playoff format has them on the outside looking in when it comes to the postseason. Although an official announcement has not been made, the win may qualify Ocean City for the 2018 Lamar Hunt U.S. Open Cup. If the format for the 2018 national tournament remains the same as the 2017 edition, then the top 21 teams in the PDL will qualify. With the victory over Lehigh Valley, Ocean City guarantees that they will not finish any lower than No. 21 in the overall league standings. (Follow the updated standings / 2018 U.S. Open Cup tracking here)

Ocean City will play D.C. United U-23, the youth academy team for one of the most successful Major League Soccer (MLS) teams in the country. The senior team is tied with the Los Angeles Galaxy with 12 major trophies, by far the most of any MLS team, including five MLS Cups and three U.S. Open Cup titles.

The Under-23s are not part of a league, they spend the summer played a full exhibition schedule against a variety of amateur and professional teams. They have played against PDL teams like Lehigh Valley United and Evergreen FC, but also against pro teams like the Richmond Kickers and Bethlehem Steel of the United Soccer League. Nearly every player on the Under-23s roster is currently playing or has played for a major NCAA Division I program, such as Duke, Maryland, Georgetown, Penn State, Clemson and UMBC.

“The lads want to prove to themselves and the opposition that we are better individually and collectively and get another win for the organization,” said head coach John Thompson. “In my book there’s no such thing as a friendly.”

The game against the D.C. United Under-23s at the Beach House will kick off at 7 p.m. and general admission tickets are available at the gate for $10 each, with kids five and younger getting in free. Fans unable to make it to Carey Stadium can follow live updates on the Nor'easters' Twitter account. There will not be a radio broadcast available.