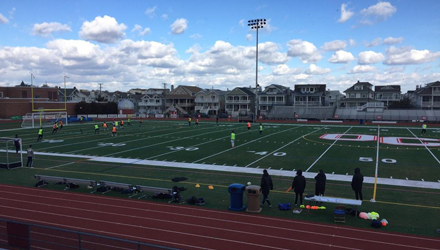 UPDATE (12/16): As part of a new partnership with the International Development Academy (IDA), Saturday's tryout will give players an opportunity to be evaluated by IDA scouts, who are looking for talented players to play overseas.

The Ocean City Nor'easters, one of the top USL League Two soccer clubs in North America, are building a championship team for the 2021 season and are looking for a few good men.

"We are excited to announce our winter tryouts for the upcoming 2021 season," said Nor'easters general manager Giancarlo Granese Jr. "As a club, we are looking forward to the summer of 2021 as we were not able to play this past season. With everything going on with COVID-19 and the uncertainty of college soccer in the spring season it makes tryouts like this very important. We are looking for key players to attend this tryout and to make an impact on the upcoming season."

In addition to members of the Ocean City Nor'easters coaching staff and front office evaluating players for possible roster spots for the 2021 USL League Two season, there will also be scouts from the International Development Academy (IDA) in attendance. The IDA is looking for talented players to play for and train with teams overseas. With so much uncertainty surrounding the upcoming college soccer season, this may be an opportunity for players to get valuable playing experience overseas.

The Nor'easters will play in their 24th season as a club (18th as a member of USL League Two) in 2021. Out of the more than 70 teams in North America, the Nor'easters have the sixth-best record in USL League Two since 2003, and the seventh-most wins in the history of the league. The Storm also play at one of the best home venues in the country, Carey Stadium. It is nicknamed "The Beach House" because it's located right off the boardwalk, next to the beach, and just a few hundred yards away from the Atlantic Ocean at America's Greatest Family Resort: Ocean City, N.J. The Nor'easters also perform well in front of their fans, owning the fourth-best home record of any team in the league since 2003.

After the 2020 season was canceled due to the COVID-19 pandemic, the Nor'easters are expecting to challenge for a league title in 2021 with some of the top players from the region and around the country. A strong performance in the 2021 league season could also lead to a berth in the 2022 Lamar Hunt U.S. Open Cup, a national tournament where Ocean City has upset six professional teams in club history.

The Nor'easters not only have a strong tradition of team accomplishments, but also with individual players. Since 2003, more than 90 Ocean City players have moved on to play the game professionally in more than 20 countries from around the world. There have been 26 players drafted by Major League Soccer teams, including at least one in each of the last six years, including 2019 USL League Two MVP Deri Corfe. Corfe became the third Nor'easters player to team history to win the league's MVP award. Ocean City is one of only two teams in league history to have three MVP winners.

Players who are interested in trying out should fill out the online form HERE. For any additional questions, please contact the Ocean City Nor'easters team office at (609) 432-8371, or send an email to tryout@oceancityfc.com.

All student-athletes must confirm eligibility to participate with their respective college, university or the NCAA.

Founded in 1997, the Nor'easters joined the Premier Development League in 2003, and since then have seen more than 90 players move on to play the game professionally, including Tyler Miller of Minnesota United FC, John McCarthy of Inter Miami CF, Ken Tribbett of Nashville SC, Brendan Hines-Ike of KV Kortrijk (Belgium) and Tony Donatelli of the Baltimore Blast. You can see a comprehensive list of #OCN alums currently playing professionally here.