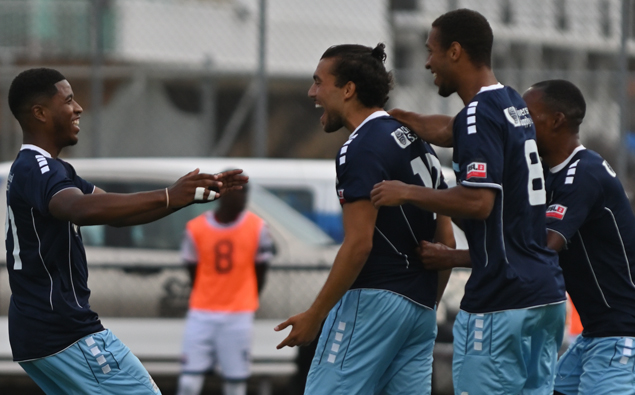 Ocean City Nor'easters forward Simon Becher (St. Louis Univ. / Brooklyn, CT) continued to reward his head coach for his faith in him. After scoring a pair of goals in his first start of the season in Saturday's road win over Northern Virginia FC, Alan McCann put Becher back in the starting lineup again on Wednesday night. The St. Louis University product capitalized on the opportunity and scored the game-winning goal early in the second half in a 2-1 home win over Philadelphia Lone Star FC.

Becher's sixth goal of the season puts him in a tie for the league lead. It also marked the second game in a row where Becher and Tal Segev (NC State / Rishon LeZion, Israel) accounted for all of the goalscoring.

With the win, the Nor'easters remain unbeaten (5-0-1) and move within three points of first place West Chester United. Lone Star FC remains in fourth place after falling to 3-5-0. The victory also extends a pair of unbeaten streaks for the Storm. Ocean City is now unbeaten in their last 13 games, and they haven't lost a home game at Carey Stadium ("The Beach House") in 12 games, both dating back to the 2019 season. Both streaks are the second-longest in club history.

The match was originally scheduled as a road game for Ocean City, but due to some scheduling conflicts with the Lone Stars' home venue in South Philadelphia, the game had to be moved. After exhausting all local options on short notice, it was decided that the game would be played at the Beach House in Ocean City, N.J., America's Greatest Family Resort.

It was the first meeting between the two clubs in USL League Two play, but the game was the third time that they had met at Carey Stadium. The Nor'easters defeated Lone Star FC (then known as "Junior Lone Star FC") 3-1 in the First Round of the 2017 Lamar Hunt US Open Cup. They met again in a friendly on July 10, 2019 that finished in a 1-1 draw.

The match got off to a fast start as the Nor'easters took the lead less than 10 minutes into the game for the third time this season. Tal Segev (NC State / Rishon LeZion, Israel) took a free kick from near the top of the 'D' that froze Philadelphia goalkeeper Liam Smith and ended up in the back of the net. It was Segev's second goal of the season after scoring his first -- also off a free kick -- last Saturday against Northern Virginia FC.

Less than a minute later, Philadelphia nearly equalized after a bending ball was sent in from the left wing. After the ball deflected off the head of an Ocean City defender, Forster Ajago found himself open in front of goal and he headed the ball on frame but Jahmali Waite (UConn / Philadelphia, PA) made an impressive save and pushed it over the crossbar. It was the only save Waite would need to make all day as he earned the win in his fourth straight start, improving his season record to 3-0-1 (0.89 GAA).

In the 11th minute, Lone Star FC nearly gave away a second goal when August Axtman attempted to play a ball back to his goalkeeper near midfield. Becher read the pass and ran onto it, putting himself one-on-one with the keeper. Defender Alvin Halley would save the day for Philly as he tackled the ball away from Becher to shut down the attack inside the penalty area.

Philadelphia would find their equalizer in the 17th minute when Abdul Kooistra sent in a free kick from the left wing which found the head of Zoncher Dennis, who flicked the ball to the far post and past a diving Waite. It was homecoming goal for Dennis, who spent three seasons with the Nor'easters from 2012-14 and remains the club's fifth all-time leading scorer with 17 goals in 37 regular season games. He also helped Ocean City make two playoff appearances, including a 2013 Eastern Conference championship.

But on this night, Dennis became just the second opponent to score a goal against the Nor'easters at the Beach House this season. The other was Leon Maric of West Chester United in the Storm's 2-1 win on May 23. Maric also previously played for the Nor'easters.

"We put ourselves in trouble in the first half by conceding the free kick needlessly that led to that goal," said McCann. "We have to be better in those moments. The determination to get through a chaotic game was very good though but we still have a lot to work on."

In the 36th minute, the Nor'easters had two chances to regain the lead as Austin DaSilva (Univ. at Albany / Broofield, CT) made a run down the right wing, avoided a tackle from Axtman and gained the penalty area on the right side. With options in front of goal, DaSilva took the shot and it was saved by Smith, but the rebound fell to Bakary Bagayoko on the left side of the box, but his shot attempt was blocked and cleared away by the defense.

However that clearance wouldn't last long as the Nor'easters stormed back into the Lone Star backline seconds later with Becher running down the right wing. He played the ball across to Montel McKenzie (Tennessee Wesleyan / London, England) who has his point blank shot saved by Smith.

The match was tied at 1-1 heading into halftime and it took until the 55th minute for the Nor'easters to break the deadlock. A Philadelphia attack was cut out by Ocean City defender Josh Thacker (Old Dominion / Hull, England) who sent a booming ball in the air up the field. Becher ran onto the ball with two defenders closing in on him and he managed to win the ball, find space on his right foot and fire a shot at the top of the box that beat the goalkeeper.

For Becher, it was his team-leading sixth goal of the season, which also ties him for the league lead in that department. It was Thacker's first assist of the season.

The Nor'easters would keep the pressure on. Four minutes later, Becher would bring down a long ball on the right wing, avoid a defender, and play a ball across the box. Jackson Temple (Rutgers / Millville, PA), who made his first start of the season, redirected the ball on goal, but Smith was there to make the save.

In the 82nd minute, a long ball from the Nor'easters backline was brought down by Nick Blacklock (Virginia Tech / Hellertown, PA) who took it to the end line on the left wing. Blacklock curled a ball in to the far post where Gilbert Waso (Elizabethtown Univ. / Elizabethtown, PA) was wide open and headed the ball on frame only to see Smith make yet another impressive save.

Liam Smith would make six saves on the night to keep his team in the game, but late in the contest would suffer an injury thatt would require him to be taken to a nearby hospital. It was a brave performance by the netminder and the Nor'easters organization wishes him a speedy recovery.

Goodwill Agbaadem would come in to replace him and he made a pair of impressive saves of his own as the Nor'easters pushed for an insurance goal. Some good transition offense and crisp passing led to MD Myers (High Point / Delran, NJ) receiving the ball on the right wing, The Hermann Trophy semifinalist played the ball across to Blacklock who slid in to take a shot from close range but Agbaadem made a reflex save to keep it out.

Waso would play Myers through on the right wing who dribbled into the box and fired a shot that forced another reflex save from Agbaadem. The rebound fell right back to Myers who took another shot, this time with his left foot, but the ball went just wide and into the side netting.

The Nor'easters will be back at the Beach House for their next league game this Sunday, June 13 as they will host Northern Virginia FC. A win would put Ocean City firmly in control of second place in the division, and if Reading United can knock off West Chester United on Saturday, the Storm could find themselves in first place. Tickets for that game, and all remaining home games, are available online HERE.